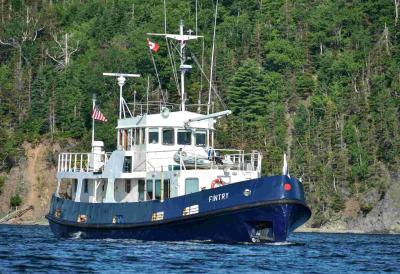 Fintry is for sale.

After our circumnav, we decided that we wanted to retire living aboard. So we started looking. Fintry is one of 64 Fleet Tenders built for the Royal Navy in the 1960s-80s. We bought her in 2003, had two years worth of work done on her in Portland, England and brought her across the Atlantic in 2005. Since then she has been berthed in East Boston and we have continued the conversion to an Expedition Yacht. Notable is that the interior birdseye maple and tiger mahogany paneling is from the 1950s Italian refit of Thomas Lipton's Shamrock V. We have cruised her to Narragansett Bay, Cape Breton Island, the Bay of Fundy, the Hudson River and, in 2018, a 5,200 mile, 40 lock, trip to the five Great Lakes via the Saint Lawrence River. We took it easier in 2019 -- only 1,650 miles and six lockings, on the southeast coast of Nova Scotia, Cape Breton Island, and PEI. There's far more than you want to know about her at www.mvfintry.com. The photo shows her outside of Maskell's Harbour, Cape Breton. photo by Skip Barker