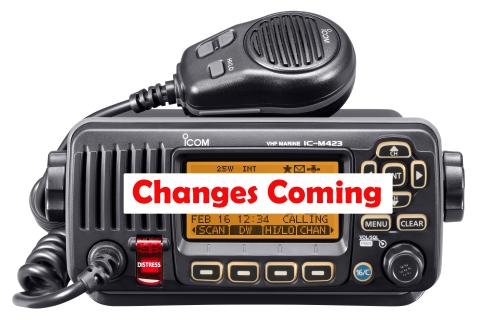 While working with fellow CCA members on a comprehensive marine safety manual, I found that the powers that be have prospectively revised VHF channels. The changes are intended to harmonize global communications but, in the natural order of things, will likely cause some short-term confusion.

The changes relate to two somewhat obscure aspects of VHF-FM marine radios: the USA-CAN-INT mode switch, and the “A” character on the channel display. The mode switch for selection US or Canadian or International channels is probably known more for becoming a barrier to communications when set to the wrong position; many channels are different and cause confusion when you’re on INT and you should be on USA.

Some channels are used differently in the US, in Canada, and in the rest of the world. Many channels are simplex (all talk on same frequency) in one area, but duplex (two frequencies so both can talk at same time like a telephone) in others. Where the US has designated an otherwise duplex channel as a simplex channel in US waters, the channel appends an “A” character when in US mode. Popular examples include 21A, 22A, and 23A -- channels that are used by the Coast Guard. Those channels simplex in the US but not when operating in International mode, thus the Alpha designation in the US.

Trying to simplify this sometimes confusing issue, the International Telecommunications Union has renumbered these alpha channels in the U.S. They will now be known as 1021, 1022, and 1023 with no “A” or “alpha” suffix. Rather than provide you with a complete list, you can simply add 1000 to any channel that currently has the “A” suffix, or check this link on the Coast Guard’s Navigation Center page.

Some VHF transceivers already have the ability to show the four-digit channel numbers, and all new models will have this ability. How soon stations will be requesting that you “switch and answer on channel 1022” is anyone’s guess. While an imperfect solution, it may prove easier to have numeric-only channel designations in the US from now on.

A final note to US users:  If your VHF does not display such channels as 66A, check to see that you are in US mode.  If you still don't see an A, it's probably time to replace your VHF, as it will not communicate effectively on these channels.