Since its earliest years, the CCA has recognized and encouraged significant accomplishments relating to cruising with a range of awards, generally given at our annual Spring meeting in New York.

The Blue Water Medal, our highest honor, is generally awarded annually to "reward meritorious seamanship and adventure upon the sea displayed by amateur sailors of all nationalities." Blue Water Medallists have included such luminaries of the sailing world as Rod Stephens, Eric and Susan Hiscock, Sir Francis Chichester, Eric Tabarly, Pete Goss and Bernard Moitessier. In 1940, the medal was presented to "the British Yachtsmen at Dunkerque." That medal can be seen at the Royal Thames Yacht Club.

The Rod Stephens Seamanship Trophy is awarded by the Club for an act of seamanship which significantly contributes to the safety of a yacht, or one or more individuals at sea.

The recently-established Young Voyager Award is awarded annually to young sailor who has made one or more exceptional voyages.

In addition to the awards mentioned above, the CCA recognizes accomplishments within our own ranks.

The Far Horizons Medal, established in 2005, is awarded to a CCA member for a particularly meritorious cruise or series of cruises that exemplify the objectives of the club.

The Royal Cruising Club Trophy is awarded to a CCA member and skipper who has undertaken the most interesting cruise of singular merit and moderate duration.

The Vilas Prize, named for long-time contributor Charles Vilas, is commemorative plaque is to be awarded by the Governing Board to a member who makes an outstanding contribution to Voyages (our club magazine) in the form of an article or articles, photographs or chronicle.

The Nye Award is a perpetual trophy in honor of Richard S. Nye, Commodore of the Cruising Club of America 1974-1975, awarded at the Board's discretion to honor a member who has brought distinction to the Club by meritorious service, outstanding seamanship, outstanding performance in long distance cruising or racing, statesmanship in the affairs of international yachting, or any combination of the above.

These awards are granted to members who circumnavigate or cross an ocean, with the Parkinson Award restricted to non-race voyages. Grantees are awarded the right to fly a distinctive pennant at CCA events.

Commodores, at their discretion, may make special awards to members to recognize particular contributions or accomplishments. 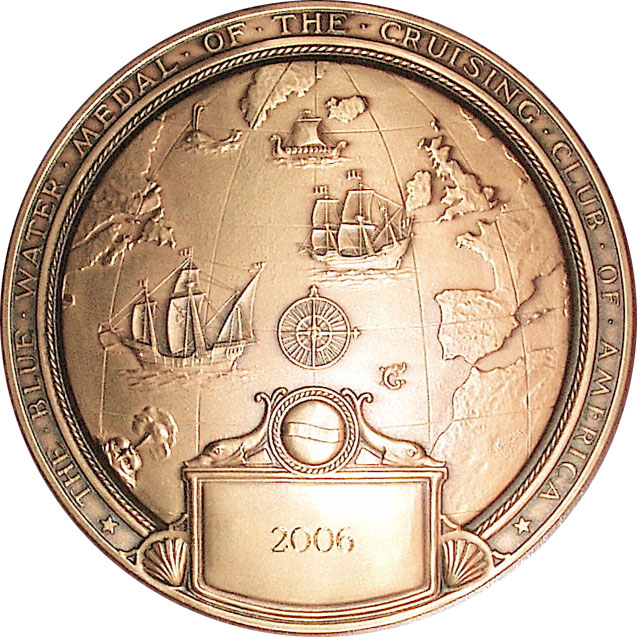 The prestigious Blue Water Medal was inaugurated by the Cruising Club of America in 1923.