This guide, first published in 1952 and continuously updated, covers the Fundy shore all the way around to include Cape Breton, Northumberland, Prince Edward Island, and the Iles de Madeleines.  Largely the work of Wilson Fitt, the current edition is being published in February 2019. Jim Watson will be the editor going forward for this guide. Check here for annual updates.

The Cruising Guide to Newfoundland

This guide covers the entire perimeter of the island. It was first published in 1956 and has continuously been updated ever since. The current edition, edited by Sandy Weld, is dated January 2018. Check here for annual updates.

The Cruising Guide to Labrador

This guide, first published as part of the Newfoundland Guide in 1956, includes the eastern Quebec shore of the Gulf of Saint Lawrence and covers all of Labrador through the Strait of Belle Isle on up to the Button Islands north of Cape Chidley. Since 1983 it has been published as a stand-alone book. The current edition, edited by Fin Perry, is dated February 2018. Check here for updates.

A Cruising Guide to the Gulf of St. Lawrence

This guide was first published in 2000 and covers the waters from below Quebec City to Sept-Iles and Cap de Gaspe, the Madeleine Islands, Prince Edward Island and both shores of the Norrthumberland Strait. The current edition, edited by Jim Evans, is dated January 2019. Check here for updates.

The Guides are available from most well-stocked nautical bookstores. 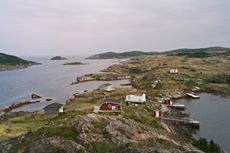 Not counting the Canadian Government, each guide covers more territory of their respective areas than any other book purporting to deal with cruising these shores. Plus there is more effort than any other publication to keep the guides up to date. As anyone knows, a publication of this nature rapidly becomes obsolete. The forte of the CCA guides is avoiding obsolescence and thus have developed a loyal band of users and contributors.

The guides are an aid for those who seek the challenges, adventures and rewards of sailing in one of the most beautiful and unspoiled cruising grounds of North America. And for those who appreciate a few tips from those who have been there before. For various reasons the guides are not all inclusive. Since their inception in the 1950s the information contained in them is provided by a corps of "correspondents" — cruising men and women who have contributed their knowledge about the areas they have sailed.

These guides came about when Charles Bartlett commented to a group of CCA members in Boston after two summers of cruising the Nova Scotia coast that he and his crew were unhappy that there was nothing available to give them some idea as to which were the attractive and safe harbors and which were not. His point was that the cruiser with limited time cruising an area appreciates a few tips from those who have been there before.

As is typical, he was appointed chairman to do something about it. That was in 1950. Thus he became editor of the Cruising Guide to the Nova Scotia Coast, which was first published in 1952. At that time it contained some 32 write-ups contributed by a dozen people. 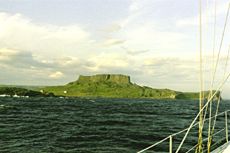 It seems the yachtsman who enjoys cruising as such always wonders what is just around the corner of the headland that marks the point where he has to turn around on any particular cruise. He vows to go back, to go further and find out. Thus these guides have grown and expanded and tried to keep pace with the changing landscape.