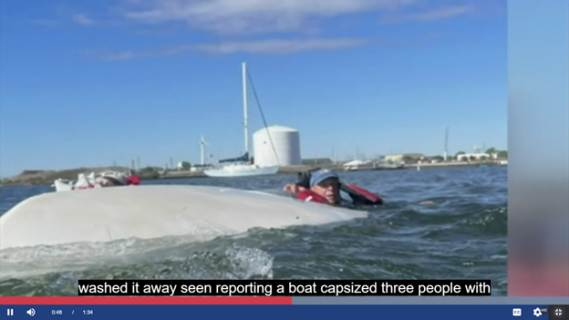 My first mate Josh Robertson, a strong swimmer and unflappable JetBlue commercial airline pilot, pulled out his phone and held it overhead to take this photo. The splashing is from his kicking efforts to propel us. I am on the right, the skyline of Lynn Harbor in the background.

Four of us were heading out for a last sail on our Swan 37 Presto, moored about ¼ mile from the Lynn Yacht Club in Lynn, in our strong 10 foot Dyer dinghy. At the last moment an old friend wanted to join us. The dinghy is rated for four but I have easily carried five in the past and elected to do so rather than making an extra trip. The wind was light and the sea fairly flat.

Ever since learning of the drowning of the skipper who fell overboard without a life jacket in this year’s Bermuda Race, I have required that my crew and I wear life jackets in the dinghy. For this I prefer the safety of foam lifejackets and all five of us were wearing them.

About halfway to our sailboat I heard someone say “Oh Sh&%!” - a bad sign. We were overloaded, low in the water. The wind was about 8 kts, the waves not large, the sailboat was obscured by a larger vessel and we turned to be able to steer for Presto. This created a small wave. A wave swept over the bow, swamping us.

The swamped dinghy then overturned. We hung onto the dinghy, with Josh kicking to propel us to the beach perhaps 200 yards away. There were several kayaks nearby but there was not much they could do.

Luckily we were seen from the yacht club and a runabout was dispatched to help us. We were towed to the beach while hanging on to the dinghy. The water was cold; probably in the low to mid 60s. I could see a helicopter overhead and several ambulances on the beach. We reached shallow water and several EMT’s carried me ashore, and into an ambulance. I had been in the water for about half an hour and was quite cold. Shivering generates heat and is a good thing. Shivering stops in the later stages of hypothermia. Bundled into an ambulance, the EMTs wanted to take me to the hospital. I was not sure I wanted to do that. As a retired neurosurgeon, I knew hospitals are cold and do not provide warm clothes. The EMTs took off my wet clothes which made me even colder, wet clothes acting somewhat like a wetsuit. They wrapped me in warm blankets. These do not stay warm long. Remembering the aphorism that a doctor who treats himself has a fool for a patient, I decided to let them take me to the Salem hospital.

I could see my crew walking on the beach, and one of them, age 88, went back into the water to retrieve his floating backpack containing his keys. He seemed unaffected by the cold water.

After a quick trip to the hospital I was wrapped in a plastic bag, a Bear Hugger, with warm air blowing into it. This warmed me slowly. It is important to warm up slowly as the cold blood in vasoconstricted extremities can, if warming is too fast, be released into the circulation causing cardiac arrest.

It took a while to warm up. My shivering stopped after about 45 minutes. Warm IV fluid was administered. About an hour or two later I was released.

I wasn’t going to tell my wife the story, but as the TV crew had already been to my home, she already knew. The evening news and the Lynn Item (our local newspaper) focused on the fact that all five of us were wearing life jackets.

I often used to sail from a mooring in Nahant but it was lucky this happened in Lynn near the Lynn Yacht Club. In Nahant on a Thursday morning in late September there would have been no one around to call for help. The wind and tide would have carried us out into Broad Sound, likely with fatal results.

An overloaded dinghy is very unstable, and ships water easily. We would have been in much less danger had we taken the time to make two trips to the boat instead of one.

The life jackets were vital. I prefer the foam ones as they do not require attention after immersion and there is no chance of non-inflation.

The day ended with the Evening News interviewing me in the warm bar of the Lynn Yacht Club.

The Cruising Club of America is a collection of passionate, seriously accomplished, ocean sailors making adventurous use of the seas. All members have extensive offshore boat handling, seamanship, and command experience honed over many years. “School of Hard Rocks” stories, published by the CCA Safety and Seamanship Committee, are intended to advance seamanship and help skippers promote a Culture of Safety aboard their vessels.

[1] Editor’s Note: The US Sailing online Safety at Sea course has an excellent unit on Cold Exposure, presented by Dr. Gordon Giesbrecht, an acknowledged expert in thermophysiology. Dr. Giesbrecht explains in detail about the hazards of improper warming, as well as the amount of time it takes to warm up a hypothermic patient.