1959 was an exciting summer for my family.  My Father had commissioned a 45’ trawler yacht that was being built in a yard in Meteghan, NS. It was not delivered until September, but the anticipation was great, even for a young child. That same year, the waterfront of our yacht club, the Royal Kennebeccasis, was being transformed. There was a new main wharf being built and there was a push to complete it as the Club was expecting the first visit to Saint John of the Cruising Club of America.

The RKYC Commodore that year was Charles Pratt. He and his wife Donna were close friends of my parents and we spent a lot of time on their 42’ power boat, ARCAL, that summer. The previous fall, my parents sold their boat in anticipation of the new larger one; so we were boat-less.

At the time, the RKYC had perhaps 40 member yachts, evenly divided between power and sail. It would be almost 10 years before our club marina was built, so the boats all lay on moorings. The Club was then a small volunteer organization, so a big event involved most of the membership; and the visit of the CCA was the biggest.

Between preparing the club property for guests, catering and myriad details the Club was abuzz. The CCA fleet arrived on a Friday. They made Saint John Harbour through fog and rain, where they were met by RKYC members who piloted them through the Reversing Falls. Few CCA members at that time had any experience in calculating slack-water and making a safe transit.

I remember going to the Club the next day with my Father. It was a calm Saturday morning with the fog lifting and the sun burning through. The anchorage was full of boats; many with cotton sails hoisted and drying.  The CCA Commodore that year was Henry DuPont.  I remember lots of chatter about the sails on his yacht. They did not need to be dried as they were made of Dacron; a rarity at the time.

I also remember marvelling at the size and diversity of the CCA fleet. There was even a square rigged yacht, which I now surmise was a brigantine. I just remember being a small kid fascinated by the yards.

Charles and Donna Pratt remained lifelong friends and I recall Charles saying, many years later, that he got on well with Mr. DuPont. Some of my recollections are no doubt coloured by their involvement and memories, along with those of my parents.

What I am sure of is that the visit kindled a lifelong interest in the CCA.  It would be 37 years before I was elected to the membership; but I know exactly when the aspiration took hold.

Dick Preston, of the Boston Station, whom I met in Maine on the first coastal cruise in my own boat in 1974, asked me if I would be interested in joining. That was in 1988. I had just returned from a summer cruise to Bermuda in my ketch, Glooscap II. He is shown in the photo of members coming ashore to a party at the RKYC clubhouse. Sadly he died before I was elected, but he set the wheels in motion.  I am forever grateful. 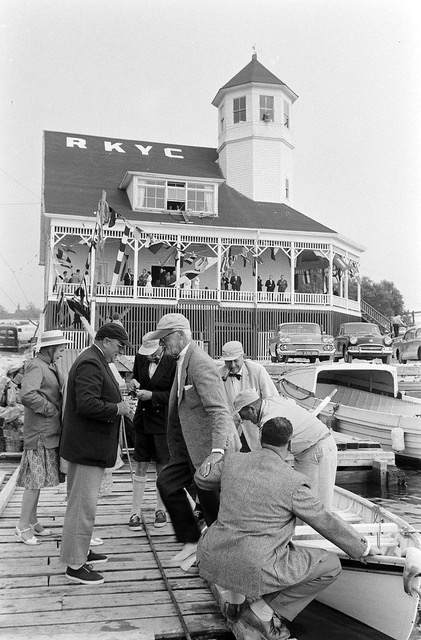 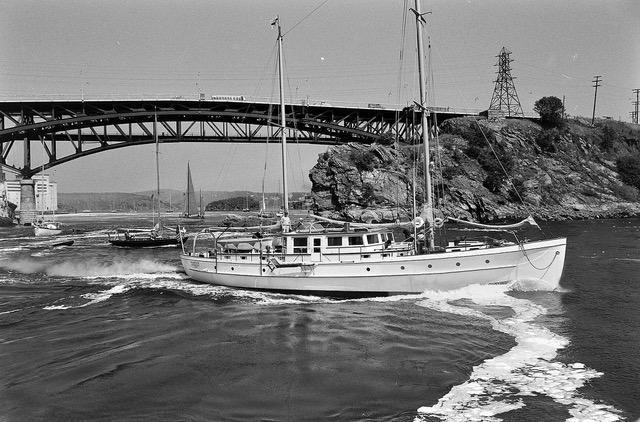