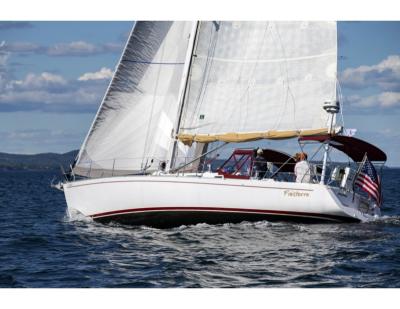 Finisterre is a powerful but graceful white-hulled sloop designed by famous JBoats founder and Naval architect Rod Johnstone. Built in 2001 as hull number 43 in the J/46 class, her two previous owners kept her in Caribbean waters until 2019 when I bought her and relocated her to New England. She cruises throughout the coasts of New England and Nova Scotia and races as part of a large J/46 class sailing under the burgee of Camden Yacht Club. Plans for extended cruising in New Foundland, northern Europe and Baltic regions are in the progress. Since arriving in New England she has undergone an extensive refit at Lyman Morse and received many upgrades including sails, electronics and solar power systems for extended offshore operation.