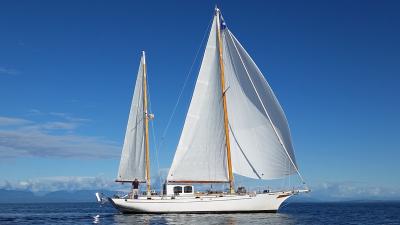 Home built as Pegasus IV in 1980 in the Great Lakes. She was sailed by the builder and his wife through Panama Canal and into the Pacific through the South Pacific Islands, ending up in Seattle in the late 1980s where she found new owners and a new name, Irene. We acquired her in 2012 and began updating systems for ocean passages. We departed Seattle in 2016 for a loop through Alaska to the Aleutian Islands. In 2017 we completed an eastbound transit of the Northwest Passage. Winter 2017/18 was spent in South Carolina, winter 2018/19 was spent in Scotland.