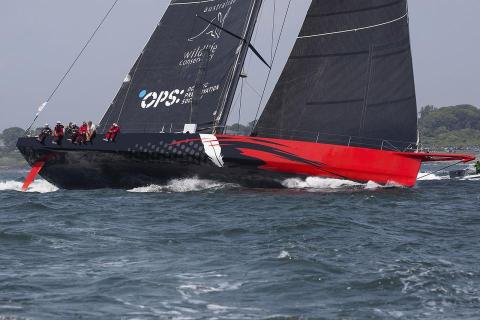 Several SF Station members had the opportunity to witness a Crew Overboard practice on an entirely different scale in July of this year. Immediately prior to the start of the Transpac, the owner of Comanche, Jim Cooney, invited Bill Lee, Sally Honey, and me to witness a crew overboard drill so that we could see how the professional crew have modified existing techniques to work well with the ultralight 100’ speedster. Stan Honey, her navigator, was instrumental in putting the event together.

The technique employed by Comanche’s crew is more like a rescue on a 45’ cruising sloop than it is different.

So what is different in Comanche’s technique?

On the day that we observed the mock rescue, the entire process took seven minutes. What was remarkable to the guests on board was the entire absence of unnecessary chatter or even raised voices. The crew either spoke in calm, relatively quiet voices or didn’t speak at all, but instead attended to their roles with quiet efficiency. The other observation was that the crew knew exactly what to do at each moment not so much because they were professional sailors, but because they had drilled on what to do and as a result there were no surprises. It was the opposite of the Chinese Fire Drill approach that many of us have witnessed in the past.

Our thanks to owner Jim Cooney, Stan Honey, and the crew of Comanche for giving us a chance to observe and record their crew overboard practice.