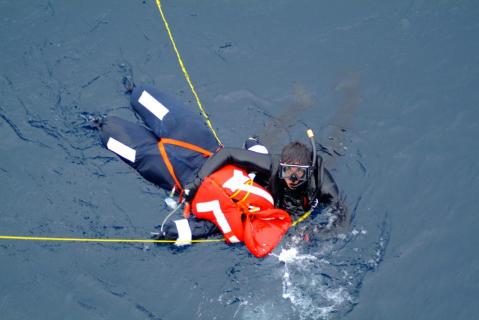 Afterwards, my no. 1 highly experienced crewmember told me that he thought he was going to die. At anchor in the Stockholm Archipelago, we had responded to a VHF distress call from a nearby 42-foot sloop requesting help in getting off rocks. Conditions: blowing in the mid-20’s gusting 30’s, gale forecast, water cold and choppy, gray sky.

I appealed for assistance from a friend in the same anchorage who was rafted to a classic motor yacht with her stout 25-foot inflatable and powerful Suzuki 250 hp outboard engine, a perfect rescue boat under the circumstances. She quickly motored over and tossed the bowline, which I fixed to our starboard midships cleat so that my crewmember and I could board from my 55-foot yawl onto the rescue boat. Both of us put on our life jackets, and I stepped aboard the bouncy inflatable. My crewmember followed – except he stepped into an empty void when a strong gust of wind blew off the stern of the rescue boat. We had failed to tie a stern line to the inflatable. Big mistake, and as a result, my crewmember, a large man, plunged into the jet black water and disappeared immediately, going under and down in full foul weather gear.

After what seemed an interminable time, he popped to the surface when his hydrostatic vest automatically inflated. I leaned over from the high-sided inflatable rescue craft, grabbed his wrist, and mouthed to him that I was not going to let him go – “mouthed” because he was wearing hearing aids that presumably were out of commission from being immersed. He looked like a deer caught in the headlights, conscious though disoriented, shivering with cold, and probably close to being in shock.

Aided by others, we wrestled our victim into my boat’s low-to-the-water inflatable and then up onto the deck of the yawl. The crew, led by a doctor and an RN, undressed our victim below deck, bundled him up with warm blankets, and put him in a berth. Full recovery took some hours, but full it was.

Lessons learned that we already knew: Tie off the stern of a rafted vessel before stepping onto it, especially in any kind of wind  - simple and basic but lost in the excitement of the moment.

Secondly, slow down, and make an action plan. That translates into forethought and when possible, rehearsal, which helps to prevent errors and may highlight shortcomings or omissions. It also would have made communication in the howling wind that much easier, with our rescue team knowing the mission step by step.

PS: The boat that initially requested help got off the rocks on its own without any outside assistance and without any visible damage.