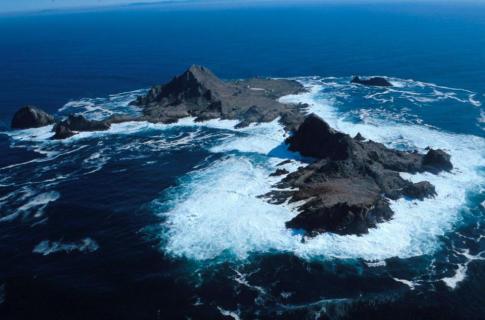 Southeast Farallon Island, about 26 miles off the coast of California,  is commonly used as an ocean racing turning mark. After starting off the San Francisco city front, most races are completed by evening. Most crews find they can lay the islands on one beat after they outwit the currents and wind shifts of the Golden Gate, and there is frequently a spinnaker reach to the finish. Races for singlehanders, doublehanders, and fully crewed boats are offered in the spring and early summer, and are very popular, despite the likelihood of fog, ship traffic, high winds, and currents that can ebb at up to 5 knots through the Golden Gate.

The night before the Singlehanded Farallones Race, I launched my Moore 24 after quickly stepping the mast. As usual, I had way too much to do, including tuning the rig, but I did take the time to connect each shroud so that there were exactly as many threads of the upper and lower studs where they engaged the barrel of the turnbuckle. No asymmetries on my boa

The next morning’s start was uneventful, and soon a fleet of perhaps 50 singlehanded boats tacked out of the Golden Gate, and finally flopped onto a starboard tack that would take them just north of SE Farallon Island, where they would bear off, set their downwind sails, gybe, and try to get back to San Francisco before the ebb started in the late afternoon.

As I approached the most dangerous part of the voyage, when SE Farallon Island would be to leeward, I heard a peculiar scraping sound, like someone was trying to sharpen a chisel using 60 grit sandpaper. Every time the bow would go over a wave, I’d hear the scratch, scratch, scratch sound. Soon, I found the problem: my upper leeward shroud had unscrewed from its lower stud and was gently scraping against the nonskid on the deck of my boat. Knowing that I had as many turns on the upper terminal as the lower terminal, I knew that I was a thread or two from losing the barrel of the turnbuckle over the side. I scrambled to leeward, rejoined the turnbuckle parts, turned the barrel hand tight, tightened the lower shroud while I was at it, and prepared for the upcoming gybe. Needless to say, had I gybed without an upper shroud, I would have lost the rig over the side while on the windward side of a rocky island.

My actions demonstrate several regrettable errors of seamanship, the principal one perhaps best chronicled in John Rousmaniere’s Annapolis Book of Seamanship, where he describes a “rushed and unplanned departure” as being one of seven mistakes in “Formula for Disaster.” Not taking the time to put cotter pins in the turnbuckles would certainly qualify as “rushed” and emphasizes human error as the leading cause of yachting accidents. My hurried actions violated principles of pre-planning and thoughtfulness, and while a checklist is another safety tool which might have helped prevent the error, safety aboard is founded primarily upon seamanship skills and practices, rather than safety gear and mechanical checklists.

Since that experience, I consciously put two turns on the lower stud before starting the upper stud so that if I make the same mistake again, the lower stud of the turnbuckle will fall to the deck and retain the barrel. My experience also calls into question the wisdom of racing around islands, where hugging the coast of the island may be faster, until a wave catches you by surprise as it did the crew of Low Speed Chase in 2012. Had any of the boats in my race or other Farallon Island races suffered some sort of failure, there would be virtually no way to avoid ending up on the lee shore. In any event, good seamanship dictates greater care and pre-planning when sailing a race course, or any itinerary  that brings one close to dangerous waters.