MOB Beacons: Getting Better and Better 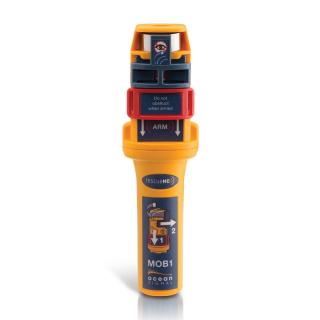 MOB Beacons: Getting Better and Better

As soon as someone comes out with a new product, or a new technology, it’s inevitable that in the next moment someone will say “yeah, but it would be neat if it could (insert some great idea here) in addition to what it does now.” When CCA member Stan Honey founded Etak in the mid-1983, these requests were called “can’t you justs”, as in “can’t you just make my Navigator show me the traffic on the roads?” It’s interesting to note that while his early car navigation systems were simple by today’s standards, virtually all of the “can’t you just” requests are now commonly found in free iPhone navigation apps.

So it is with marine electronics. One of the most exciting developments has been the progression of Man Overboard Beacons (or Crew Overboard Alarms or whatever you want to call them). Over the last 20 years or so, through about four generations of products and technology, these life-saving gizmos have evolved from being a bit iffy to being reliable and near-mandatory. Let’s briefly review the path that led to where we are now.

To return to our original theme, there is always someone who wants to combine two or more technologies and end up with the ultimate Swiss Army Knife. What if you could alert the Coast Guard and alert the crew of the mother ship and receive a regularly updated position of the poor soul who fell, unceremoniously, in the drink? Soon, that will be possible, once the regulatory hurdles are overcome. Combined PLB-GPS-AIS transmitters have been rumored to be just around the corner, and now it appears that we’ll see the first models in 2019.

One of the barriers has been the extremely high standards to which EPIRBs and PLBs are built, and the mandate that, by combining functions together in a single product, none of their capabilities are reduced. Using the Swiss Army Knife analogy, it has to be a damned good knife as well as a perfect scissors and an ideal toothpick. No compromises.

Whether this will make a difference in marine safety remains to be seen. The current crew overboard alarms are pretty close to ideal, when installed correctly on life jackets and when the navigators know how to interpret their transmissions. Training, unsurprisingly, has not been rendered obsolete by technology.