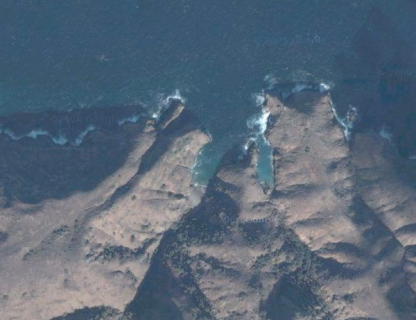 While we could have anchored at the larger, slightly less protected Lady’s Harbor at Santa Cruz Island, I chose Little Lady’s Harbor to the east, sometimes called “Baby’s Harbor”, which was very confined and beautiful. We anchored bow and stern in my father’s Cal 2-30 (on temporary loan to his youngest son), since there was no room to swing on a single anchor, and the canyons that formed the north side of the island produced frequent wind shifts. With a 15 pound Danforth-style anchor on the bow, and a 10 pound version to the stern, we were apparently anchored securely and soon went to sleep.

Around 3:00am, the motion of the boat changed, and it became obvious our bow anchor had started to drag perhaps 20’, and that was 20’ that we didn’t have. As I got the other crew members up, I started the Atomic 4 and slid the transmission into forward to take the pressure off the dragging anchor. The engine ran for about 10 seconds, and then stopped suddenly since the  stern anchor line had apparently wrapped tightly around the folding propeller. We now found ourselves with a dragging anchor, an ineffectual engine, affixed to the seabed by our inaccessible stern anchor line, with four hours to daylight.

Our solution was to launch the Avon dinghy and, by reaching into the cold water, grab one end of the wrapped anchor line and shout instructions to one of our crew who was turning the propeller shaft by hand in the bowels of the engine compartment. By turning the shaft clockwise, then counterclockwise, we were able to free the anchor line after about 15 minutes of struggling, but not before the keel started gently thumping on the sandy bottom beneath us. We retrieved the stern anchor, started the engine, and slowly powered out of the harbor as we brought in the bow rode. A few minutes later we were powering back to Santa Barbara in the dark.

My errors in judgement were many:

The Cruising Club of America is a collection of passionate, seriously accomplished, ocean sailors making adventurous use of the seas. All members have extensive offshore boat handling, seamanship, and command experience honed over many years. “School of Hard Rocks” reports, published by the CCA Safety and Seamanship Committee, are  intended to advance seamanship and help skippers promote a Culture of Safety aboard their vessels.

By
Chuck Hawley
Culture of Safety