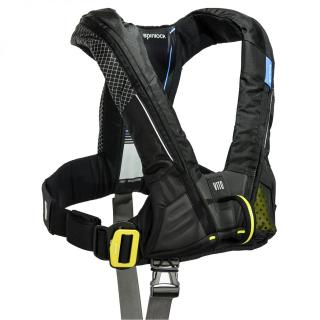 In previous Safety Moments, we’ve spent substantial time discussing the challenge of how to get boaters to maintain their inflatable life jackets so that these critical life saving items have the highest probability of inflating when needed. Thanks to the work of the CCA, US Sailing, The Sailing Foundation, and the Storm Trysail Club, among others, clubs across the country are offering in-person and online courses on this topic. At the Chicago YC in May, for example, subject matter experts from the area provided training to 52 sailors (socially distanced, of course) on the intricacies of how to maintain and rearm a wide variety of life jackets. In the May 29 edition of Lectronic Latitude, I was pleased to see an article on the online course that I had presented to US Sailing members from a few weeks back. And Sally Honey and I get daily requests from clubs and Safety at Sea Moderators around the country who are looking for the “OK” to resume in-person safety training for offshore sailors.

I like to think that the courses and articles and online tutorials are complete and easy to understand, but anyone who teaches knows that the best way to check comprehension is to listen to the questions that are asked. After my “story” in Lectronic Latitude was published, I received several excellent questions from a sailor whom is living on her boat in La Paz, Baja California. Alison Osinski, PhD, asked me the following:

1. Why don’t they standardize the CO2 cartridges and pills (I own 12 inflatables and they use 3 entirely different cartridges — those manufacturers are worse than the smartphone companies with a different cord and charger for every model).

Originally, before we had Cylinder Seal Indicators, the cylinders were standard screw-type cylinders with two different neck diameters and several gram weights for different capacity bladders. Generally, cylinders have come in 16, 24, 33, and 38 gram sizes, although I am sure someone will say that they have a 35 gram cylinder. Whatever. The complexity increased when manufacturers incorporated cylinder seal indication into their products, since it's difficult for the inflator to determine if a conventional cylinder is full of gas or not. So Halkey Roberts, Hammar, and Secumar came up with manufacturer-specific cylinders to match their inflators so that their inflators could determine if the cylinders were unused.

More recently, manufacturers including Halkey Roberts and UML have inflators that can determine whether the cylinder has been pierced without using a special cylinder. I think that we may see this becoming more widespread, which could simplify the purchase of replacement cylinders by reducing the unique rearming kits.

2. Difficulty in identifying and ever finding replacement cartridges (even West Marine where I bought the PFDs usually doesn’t have the right cartridges)

Yes, this is challenging. Originally, manufacturers encouraged owners of their life jackets to purchase an exact replacement kit, i.e. Stearns wanted you to buy a specific Stearns rearming kit to go with your Stearns life jacket. West Marine attempted to come up with more generic rearming kits that would work with a variety of models. For example, if your life jacket has the very popular Halkey Roberts 86000 inflator, and requires a cylinder with 33 grams of CO2, then you can buy a generic rearming kit. Even with that aggregation of different models, it still requires over 20 rearming kits to handle most of the life jackets that have been sold over the last 25 years.

The other issue is that while you might be a sailor with a boat full of Spinlock Deckvests with their particular rearming kit, that's actually a pretty rare life jacket across the nation. If you have 10 of them, and expect West Marine to have 10 rearming kits, you're going to get skunked every time. It doesn't make sense from an inventory standpoint to have a pile of relatively slow-moving rearming kits on-hand, especially since most of them are dated items, and are slowly losing value as they approach their end of life. (The cylinders have a practically unlimited expiration date, but the water sensing elements are generally replaced 5-6 years after manufacture.)

May I suggest that since the rearming kits are needed infrequently, and that you may want to service all of your life jackets simultaneously, that you order online for a store pickup and get them sent in from the distribution centers? If you rely on dropping in, you'll be disappointed some % of the time.

3. Outrageously high cost of the replacement cartridges (why boaters don’t test their PFDs, or carry spares— I just spent more than $350 the other day buying 1 spare for each PFD on the boat, plus I had to hire a shipper to truck them down here)

The move to generic cylinders should reduce the cost of rearming kits. They are considered hazardous goods so shipping costs are generally higher than with other types of goods. Not as bad as pyrotechnics, but still require specialized shipping staff and fewer shippers who will handle them. I tried to ship two life jackets to Denver, and Fed Ex would not accept them if they weren't packed by someone who had hazardous goods training, which I don't have.

4. Why boaters can’t get replacement cartridges in Mexico?

I don't know. This is beyond my control.

5. Why won’t airlines let you take the cartridges on many airplanes when you travel, making your PFDs somewhat worthless when you get to your destination? (One of my friends was detained by Homeland Security and then put on the terrorist watchlist for 2 years for trying to carry “explosive devices” CO2 cartridges aboard a Southwest flight from San Diego to Phoenix)

I have been traveling with my inflatable life jackets for several years and have not had a problem, including trips to Europe and the BVIs. However, and I always say this, I cannot guarantee that some overzealous inspector, who may not be aware of the regulations, removing your life jacket out of your checked bag. Here are my recommendations.

2. Print out a copy of the airline's hazardous goods pages from their website. I've done this with Alaska, American, Delta and Southwest. Also print out the documents that are on the US Sailing website. There is a specific exception to hazardous goods regulations for inflatable life jackets and a single replacement cylinder. I have flown with four life jackets in one bag and it was not flagged from San Jose to Denver. I have also had the "Inspection by the TSA" sheet inserted into my checked bags. They have never confiscated my life jackets. So far...

I place the printed sheets on the top of the bag so it's the first thing that an inspector will see.

3. I think it's less likely that you'll be able to carry-on, but it depends on the "savviness" of your TSA agent. If carrying on, I would of course have the same documents handy so you can plead your case if necessary.

4. I think that what happened to your friend who ended up on the "terrorist watchlist" is tragic, and I'd like to know more about the situation. I think that if you are completely upfront about the situation, and are prepared with documentation, you’ll be OK. I suspect that if you are sneaky or snarky, you could lose your life jacket and be subject to additional focus as you travel.

Have a lovely summer on the water! And wear a mask in addition to your life jacket...