Upside Down with Nowhere to Go: Have a way to get help! | Cruising Club of America Skip to main content

Upside Down with Nowhere to Go: Have a way to get help! 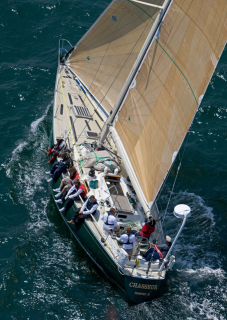 Upside Down with Nowhere to Go: Have a way to get help!

I am the Safety Officer for the NBP of the CCA. I have been sailing and around boats all of my life. As a kid my family lived on a deep-water creek in Annapolis where my brothers and I sailed almost every day, playing tag in small boats instead of on land. After getting married and consulting with schools in Baltimore, we were offered a captain and cook job on a boat in the Caribbean. That began a career of sailing professionally which lasted 10 years. My last gig was as Professional Captain of the maxi Nirvana. I supervised the construction, hired the pro crew and tended to all matters concerning safety in a world which predated GPS. On Nirvana, we competed in all of the prestigious regattas and ocean races around the world.

In all, I have logged over 200,000 miles at sea. When my wife, Nancy, announced that it was time to raise a family, I knew that that meant that it was time to come ashore. I was offered a position with the Brewer Yacht Yard Group and spent 30 years as the General Manager of Brewer Cove Haven Marina in Barrington, RI. I continued to sail with my clients and friends. When it was time for me to retire, I purchased a Swan 44, Chasseur, which had been owned and modified by Mr. Safety: NYYC Commodore Frank Snyder. I sailed her south and spent the last 4 winters in the Caribbean. One would think I would know my way around boats by now.

It was the last day of March 2020, the water was still winter cold, and I was working on Chasseur in a slip at Brewer Cove Haven Marina. The boat still had her winter shrink wrap on. I was by myself and had not told anyone in the yard that I was there.

As I was leaving the boat around 1630, having completed my chores for the day, I gathered my gear and prepared to get off onto the dock. I stepped out the shrink wrap door, I put my right foot on a boarding step, and my knee promptly gave way. My left leg was still on deck but was tangled up in the shrink wrap zipper that was inside the door. I fell backwards with my head in the water between the boat and the dock. Try as I might, I could not pull myself back up onto the boat. My left foot was at deck level. The water was cold!!

I started yelling for help, but there was no one else on the docks that could hear me. I kept thinking to myself that I had sailed around the world twice and was now about to drown in calm water next to my own boat safely tied up in a marina that I had operated for 30 years! What would my obituary say? Adding to the irony, I would likely be discovered the following day, April Fools’ Day of course!

I realized that I was not going to get out of this situation without help and remembered that I had my mobile phone, in a waterproof case, in my pocket. With my last bit of energy, I got the phone out and called the marina office. Help was quickly running down the dock. I must not have been a terrible marina manager, as my former workmates saved my life.

What lessons did I learn from this humiliating experience?

The Cruising Club of America is a collection of passionate, seriously accomplished, ocean sailors making adventurous use of the seas. All members have extensive offshore boat handling, seamanship, and command experience honed over many years. “School of Hard Rocks” stories, published by the CCA Safety and Seamanship Committee, are intended to advance seamanship and help skippers promote a Culture of Safety aboard their vessels.