Passing It On at the Port of Los Angeles Harbor Cup 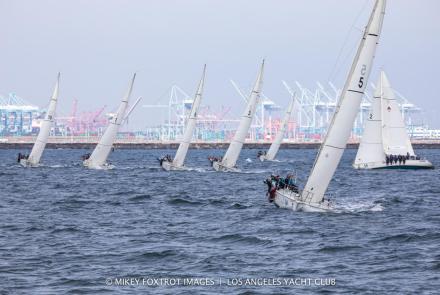 The annual big-boat collegiate regatta is a one-of-a-kind partnership between a maritime academy, a sponsor, and Los Angeles Yacht Club volunteers, a surprising number of whom also belong to the Cruising Club of America.

One-design fleet racing with 10 boats on the line is common at most collegiate regattas, but it’s not the norm to be competing aboard boats much bigger than your average Flying Junior or other sailing dinghy. In fact, there’s only one such regatta held in the ocean proper—the Port of Los Angeles Harbor Cup - Cal Maritime Invitational Intercollegiate Regatta.

This year, the 13th edition of this unique event took place March 6-8, the final travel weekend before stay-at-home orders shut down the spring sailing season in most places. As such, sailors and organizers will long remember the racing in Hurricane Gulch off the Los Angeles Yacht Club for its excellent weather and a good range of light to moderate sailing conditions. 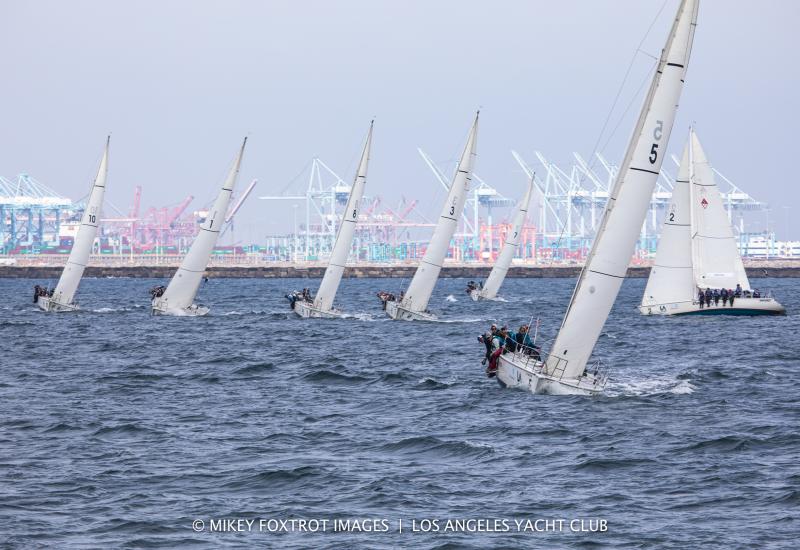 Sailing just outside the Port of Los Angeles, the busiest container port in the United States, Harbor Cup competitors find the layline in a purpose-built fleet of Catalina 37s

The Cal Maritime team will recall the first-place silverware they took home after a hard-fought battle with College of Charleston and U.S. Naval Academy. The Penn State team, new to big boat sailing, will remember all the lessons they learned en route to a spirited 10th-place finish. And all the teams will recall what was required to set, jibe and douse a big symmetrical spinnaker and how good teamwork didn’t necessarily gain you a place but mistakes always seemed to cost you. (See 2019 results.) 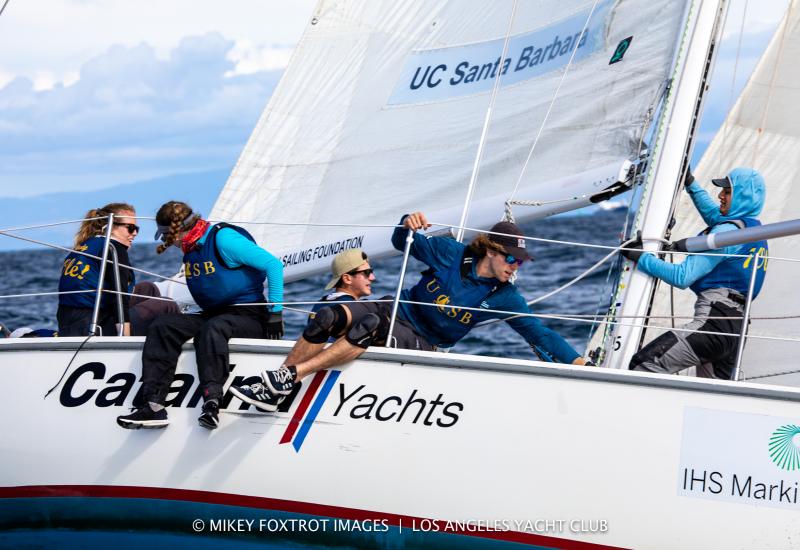 The UC Santa Barbara team sets up to hoist the chute

“We started the Harbor Cup in 2008,” says Jim Morgan, LAYC staff commodore and long-time CCA member. California Maritime Academy had competed at the Kennedy Cup at the U.S. Naval Academy in Navy 44s, after which CMA president Rear Admiral Bill Eisenhardt asked Morgan why there was no similar big-boat event on the West Coast.

“At the time, I was vice commodore of LAYC,” Morgan says, “so Bill and I approached the Port of Los Angeles, the No. 1 container port in the U.S., and pitched the idea of a tripartite arrangement—the Port would be a sponsor, Cal Maritime would be the inviting school, and the LAYC would do all the heavy lifting.”

Morgan found suitable boats just down the coast at the Long Beach Sailing Foundation, which has a one-design fleet of 11 Catalina 37s available for charter. The boats, incidentally, were designed specifically for the Congressional Cup by LAYC and CCA member Gerry Douglas, who donates a half model to the winner each year. 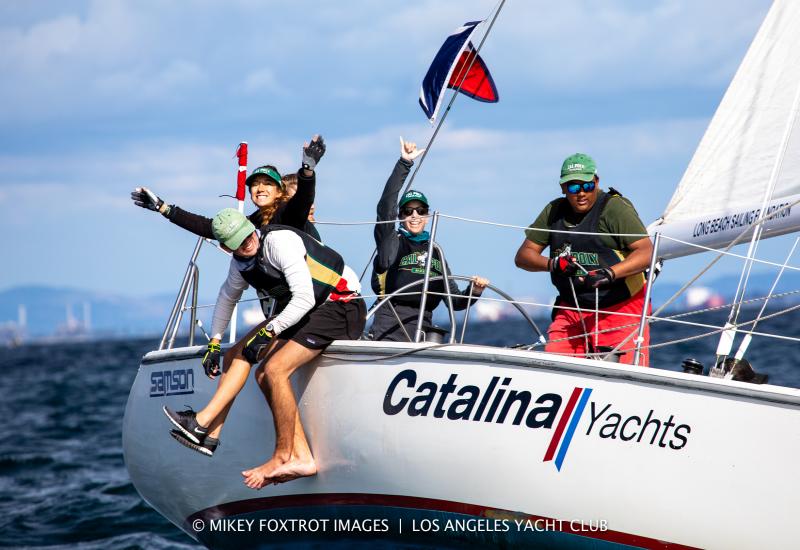 The Cal Poly team does an enthusiastic fly-by for the regatta photographer, Mikey Foxtrot Images.

Thirteen years later, 125 varsity teams and more than 1000 competitors have competed, and the regatta and its underpinnings remain strong. The Port, which provides one out of every nine jobs in the five-county area, has a mission to promote navigation, commerce and fishery, and with each regatta, it introduces another 100 sailors to the Port of LA, its international trade, and environmental stewardship. The entry list includes several maritime academies every year and many graduates end up working at the Port or on ships passing through.

Morgan, a Cal Maritime graduate, has spent a lifetime on the waterfront. He is a former captain of oil tankers and port pilot in Los Angeles, and for many years he campaigned a Santa Cruz 50 in all of the major West Coast races, including Transpac races to Honolulu and Tahiti.

The regatta, Morgan says, is a great chance for Cal Maritime to fly its flag in Southern California. The school is located in Vallejo on San Francisco Bay, but half its student body hails from the southern half of the state.

It’s also a good opportunity for college sailors to see a pathway into bigger boats and learn about the Cruising Club of America, which was helped this year by the provision of the CCA’s Voyages magazine to every competitor by Commodore Brad Willauer. The keynote speaker at the Saturday night event banquet is also typically a CCA member such as Bill Lee, Stan Honey, John Jourdane, Alan Andews and, this year, Gary Jobson. 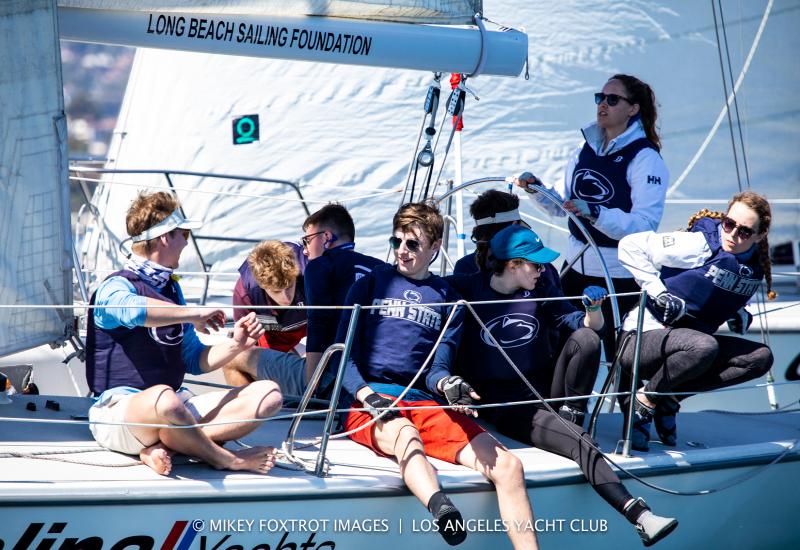 The Penn State team had the steepest learning curve at the Harbor Cup and came away with the Spirit Award.

Morgan draws a clear line between his former occupation and his avocation, saying, “Today, the best merchant seamen are those that grew up in yacht clubs, starting in Sabots; there’s no substitute for learning how the forces that affect a sailboat are the same that affect an oil tanker. Some of the best third mates I ever had grew up in sailing programs.”

Morgan is proud of the rich history of ocean racing at LAYC and its commitment to the values of ocean sailing. “Until I’m proven wrong,” he says, “I maintain that we have won more Transpacs than any other yacht club.”

One of the unique things about the way the club runs the Harbor Cup, Morgan says, is that it’s entirely free. There is no registration fee. Housing, food, and boats are provided, even RIBs for the coaches. Where do 100 sailors stay? On LAYC member’s boats. “Plus the kids eat about 10,000 lbs of food over four days,” he adds. 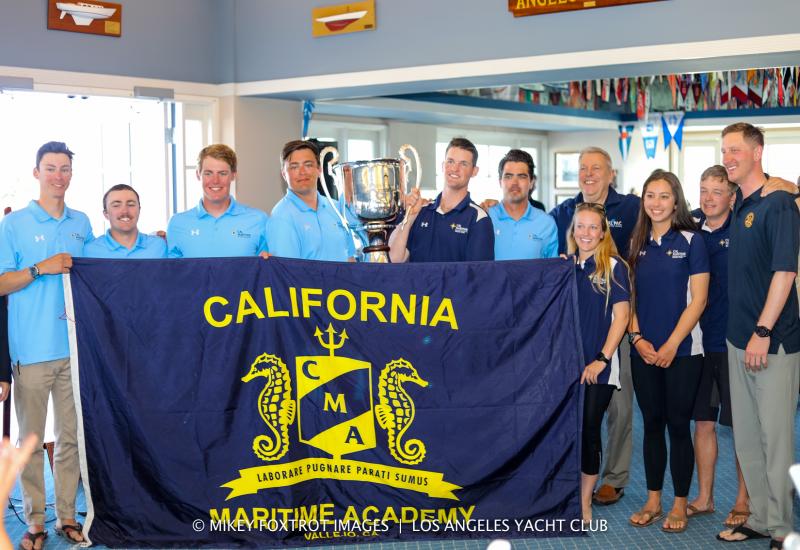 Thirteen years after it began , the club takes the event so seriously that in the year after the club commodores finish their term, they automatically chair the Harbor Cup. According to Morgan, the vice commodore is in charge of budgeting and coach boats, the rear commodore handles housing, and the fleet captain manages the Catalina 37s. A majority of LAYC members are involved.

Morgan passed on the leadership of the regatta to other LAYC members after the first five or six years, but is still a driving force in planning and fundraising, and his wife Jill, a Maine Maritime graduate, produces the epic 44-page race program.

Morgan gives a special shoutout to three fellow sailors who took the bull by the horns to get the regatta off the ground in the first place—Chuck Cook, Al Garnier, Ric Sanders. Each is a member of both LAYC and the CCA.

In fact, the number of LAYC members who are also CCA members turns out to be extensive. After our conversation, Morgan sent a postscript of appreciation for a long list of CCA members from the Southern California station:

The following CCA SOC members have been instrumental in creating and continuing the Port of Los Angeles Harbor Cup – Cal Maritime Invitational Intercollegiate Regatta. Members have: provided their yachts for team housing, served on Race Committee, provided coach boats, provided financial support and have carried out a myriad of other critical duties.