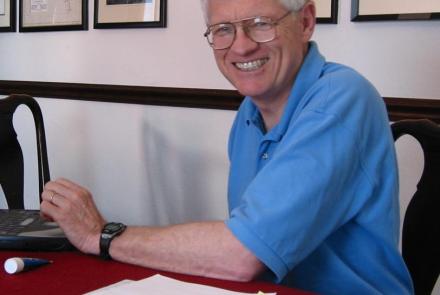 A leader in the sport as author, sailing historian and safety-at-sea advocate, John Pierce Rousmaniere has more than 40,0000 offshore miles in his wake, much of that racing. We’re proud to congratulate him on joining 10 other Cruising Club of America members among the 89 sailors currently in the National Sailing Hall of Fame.

On September 12, 2020, John Rousmaniere (pronounced “room-an-ear”) will be inducted into the National Sailing Hall of Fame along with eight other extraordinary individuals in the Class of 2020. Together, their combined talents have extended sailing’s rich tapestry of design, innovation, education, artistry, and extraordinary performance. In his several capacities, John not only has told the stories of others, but also applied his sailing knowledge and research skills to help move the sport forward in several areas, particularly safety at sea.

An accomplished inshore and offshore sailor, John gained well-deserved recognition throughout the sailing world after racing in the tragic ‘79 Fastnet Race and quickly producing the landmark Fastnet, Force 10. The experience activated an enduring focus on promoting safer yacht design and crew safety practices.

With Dennis Conner, John had already written No Excuse to Lose in 1978, and as a freelance author, he launched a writing career that so far includes 30 books, scores of magazine articles, TV and video scripts, and more. With a safety focus, he edited books like Desirable and Undesirable Characteristics of Offshore Yachts and The Annapolis Book of Seamanship, now in its fourth edition. His interest in boating history produced books ranging from The Low Black Schooner: Yacht America to A Berth to Bermuda: 100 Years of the World’s Classic Ocean Race and yacht club histories for New York Yacht Club and several others, including his current project for the Seawanhaka Corinthian Yacht Club.

John also became a sought-after public speaker, whether moderating safety-at-sea seminars, speaking at boat shows, or presenting talks promoting participation in the next Newport Bermuda Race. All the while, he continued sailing offshore, until 2018 when he realized it was time to hang up his sea boots. Even that decision, he turned into a safety education moment for others, writing Farewell to the Gulf Stream for Cruising World magazine.

John shares a connection with nearly all of these sailors, including some of those involved with the CCA from its earliest days. Before he became a freelance writer, John served as an editor at Yachting magazine under Bavier’s leadership, the same Yachting that Stone led four decades earlier. John also had a longstanding relationship with the Stephens brothers and notably served as editor of Olin’s autobiography, All This and Sailing, Too.

John is no stranger to sailing halls of fame either, but in the past he’s been the selector, not the selectee. He served for three decades on the America’s Cup Hall of Fame Selection Committee, and he created the Bermuda Race Roll of Honour while serving as the Newport Bermuda Race media chair from 2010-2016. Of course, he was also tapped for several years to be on the selection panel of the National Sailing Hall of Fame, of which he is now a deserving member.