Rowing Across the Atlantic 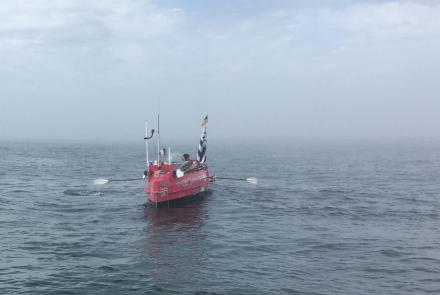 On June 15, Guirec Soudee, the CCA’s 2019 Young Voyager awardee, departed from Chatham to row across the Atlantic. Woody Metzger, of First Light Boatworks, towed Guirec’s 27 foot purpose-built rowing craft from Mill Pond out  to the open ocean. The channel between Stage Harbor and the break south of the lighthouse is shallow, winding and beset by strong currents, so it would have been impossible for Guirec to row through it.  Guirec did a short row away from the dock, then Woody attached a tow line to go through the Mitchell River Bridge, and out Stage Harbor. The channel around Morris Island is tortuous, and the buoys must be moved every few days. At the east end of the island we could witness the ocean’s power as recent erosion has toppled the bluff, and destroyed some of the Wildlife Center’s buildings. The swell was modest, but still breaking on the shallow bars on either side as we motored east into the open ocean. The fog closed in as the water became colder, and by the time we were safely clear of the shallows and the current, we could only see a quarter mile. As we prepared to cast off the tow, Guirec stripped down to a tee shirt anticipating the hard effort of rowing. It was daunting just to imagine the task that lay ahead of him, with 80-90 days and 2800 nautical miles before he reaches France. As we turned back toward the land, we quickly lost sight of him and his lonely boat.  At high speed, it didn’t take long to reach the coastline; by Stage Harbor, it was clear, with many people enjoying the sun on the beach. Quite a contrast with the lone figure in a rowboat that we had left astern. Guirec has done this before and was in great spirits as he set off again, but our small group nonetheless felt humbled and awed by his courage.