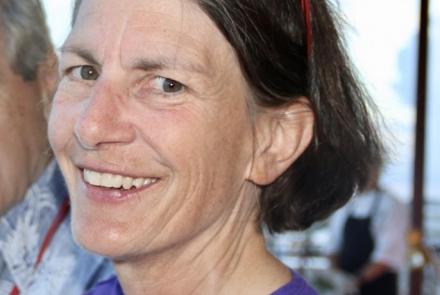 The first female Commodore of the Cruising Club of America (and recipient of the club’s prestigious Richard S. Nye Trophy), a New York Yacht Club Race Committee member, a member of the Fales Committee of the U.S. Naval Academy Sailing Program, a Maritime Studies Advisor to SUNY Maritime College, a past Director and Interim Executive Director of the Museum of Yachting, an executive committee member at Mystic Seaport Museum, longtime mainstay of US Sailing,  an authorized Safety at Sea Seminar moderator (and much, much more!), Sheila McCurdy is a sailing icon.

“I was taken cruising with my parents, older brother and sister at three months old. I do not remember learning to sail. I did go to junior sailing at the Cold Spring Harbor Beach Club, learned the names of all the parts, and raced in Blue Jays. My first boat was a Laser, which I owned for a short while in the early ‘70s.”

Sheila is the daughter of yacht designer Jim McCurdy. “I worked in Dad’s office, McCurdy and Rhodes Inc., on rare occasions when they were shorthanded,” she explains. “As a teenager, I was once tasked with determining the volume of a keel using a planimeter. It seemed miraculous that the mechanical device could take measurements from the drawing and with a few additional calculations one could get a very close approximation of the amount of lead required for ballast. My brother Ian is a naval architect who worked for Dad…a family cannot afford more than two yacht designers!

“On the technical side of sailing, I ran IOR certificates for USYRU (before it became US Sailing) for a couple years after college. I went on to build tank test models and hull appendages for GMT, and lofted an aluminum 72-footer for Merrifield Roberts. Thereafter I became a professional captain and project manager, before turning to museum management, writing, speaking, and developing educational and training programs.

“I started sailing offshore after college by signing on as cook for a transatlantic passage. That year I sailed transatlantic three times and sailed in a Fastnet Race and a Newport Bermuda Race. I learned that navigating and skippering were easier than cooking at sea, but I did learn how to cook. I first sailed offshore with Dad after he built Selkie, a 38-foot McCurdy & Rhodes sloop, in 1986. Prior to that he raced with clients, who for some reason never invited his daughter to join their crews. Nineteen Eighty-six, ‘88, and ‘90 were the last three Bermuda Races Dad sailed. He quit after twenty races (forty years). My brothers Ian and Charles were both aboard, along with a few close friends. I navigated, stood watch, and usually cooked.

“Dad loved sailing offshore. He did not push or coach the crew. He assumed we knew what to do. From a navigational point of view we had Loran, but the quality of the signals were suspect by the time we approached Bermuda, and much less was known about the currents and eddies outside the Gulf Stream itself. Weather forecasts out to three or four days were generalized and unreliable. We could listen to synopses and forecasts from High Seas Radio on the SSB. It was a time that the job of navigator was transitioning from keeping track of where a boat was to anticipate where the skipper wanted the boat to be in 24, 48 or 72 hours. We had no idea where the rest of the fleet was. We generally finished just out of trophy range in our highly competitive class. But the camaraderie aboard was great, except for an occasional complaint about Dad and his friend Jack Merrill smoking below. 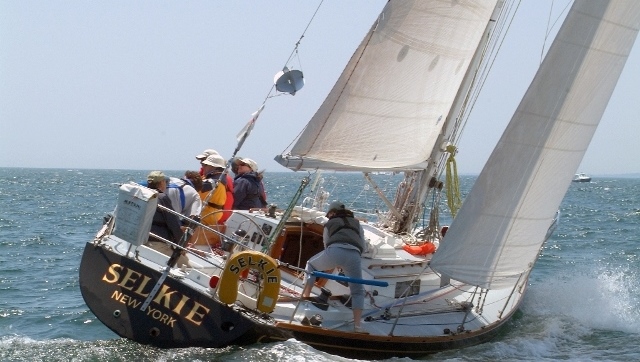 “In 1992, Dad asked me to skipper and navigate Selkie to Bermuda without him. That was poignant, and we did okay. But in 1994 we finished second overall in the St. David’s Division—missing first by fifteen minutes (and third by four minutes). Dad was speechless on the phone. The crew was my two brothers, fiancé Dave, and three other regulars. It was the first year the Cruising Club of America had admitted women members. I was among the first. Because of that membership change, the CCA claimed the top three finishes in the race. The near triumph had a bittersweet side: Dad died suddenly about six weeks later. I inherited Selkie after Mom died in 2008.

“I have been fortunate to have many mentors over the years, starting at nineteen when Timmy Larr asked me to crew for her over a summer of racing in Solings with the intention of going to the North American Women’s Championship, the Adams Cup. Timmy demonstrated the epitome of competitive sportsmanship on the water. Her approach was studied, focused, and intuitive. She was alert to every change of wind and sea. I learned fine-tuning of sail trim and how to read the dynamics of the fleet. I saw resolve upon losing and grace upon winning. I believe the only direct bit of advice Timmy gave me was after I had jibed the kite in a close race and was returning to the cockpit. I stepped on the doused jib and slid over the side. I caught the skinny shroud with my fingers and was dragging along the side while Timmy and her sister Beegie got the boat going before they hauled me back aboard. Timmy said in a firm voice with a smile, ‘Don’t do that again.’ I didn’t. We won the championship. No one could have made it look easier.

“After college, I talked my way onto a 47-foot yawl sailing transatlantic. I volunteered as cook as long as I could stand one third of the watches because I wanted to learn offshore sailing. The owner of Puffin was Ed Greeff, a dyed-in-the-wool CCA member at the advanced age of 65 (younger than I am now). Ed was in the Merchant Marine during World War II and had sailed with his uncle growing up. Ed proved that one does not have to lavish money on a well-designed and well-built boat to keep it beautifully and log thousands of miles a year. Ed had a binder of ‘boat rules’ that kept the crew coordinated and the boat orderly. I learned that solid seamanship underlies the most successful passages. Even as we ran through the tail end of a hurricane under bare poles for twelve hours, I always felt the crew and the boat could handle what came.

“Rod Stephens was a close friend of Ed’s and joined us for the Fastnet Race. I had met Rod once before when I was eight. He magically had produced candles for my birthday cake when our family boat was anchored in the same harbor as Mustang. Rod loved a boat sailing at peak performance. The first step was to inspect every inch of the boat from masthead to bilge, all deck equipment, and every spare and tool aboard. Only when a crew has confidence that everything is as it should be, can they push the boat to do its best. It turned out to be a slow, frustrating race, but Rod seemed to be energized by the challenge. He seemed as passionate about sailing as he had been on Dorade over forty years before.

“Not all mentors are older and famous. Skip Pond is a friend I met in college and invited me to sail deliveries with him after I moved to Newport in the 1970s. He taught me celestial navigation and engine troubleshooting. He treated me as a peer. We worked out some daunting problems together far from land. Through Skip, I realized I had developed the skill and experience to skipper a boat offshore. This was at a time when young women were often barred from racing crews, except as cooks. The younger guys I sailed with offshore were encouraging and sometimes devious in getting me a slot on a crew.”

“The Cruising Club of America Safety at Sea initiatives have been part of the club’s history from its beginning in 1922. The club was formed to encourage well-designed and constructed yachts and good seamanship among amateurs.

With the advent of the Safety at Sea Seminars following the disastrous 1979 Fastnet Race, I am certain that lives have been saved. We cannot keep statistics on what did not happen, but safety records on races that require training are good. The CCA and the Newport Bermuda Race were early proponents of requiring Safety-at-Sea Seminars. John Bonds and John Rousmaniere, among others, set a standard that has been adopted by major race organizers in the U.S. and copied in countries around the world. I became one of a handful of moderators nationwide about twenty years ago. Almost every moderator appointed by US Sailing since the mid-1980s has been a CCA member. Until the Covid-19 shutdown, 25% of those taking US Sailing sanctioned, hands-on Safety at Sea training earn their certificates through courses hosted by the CCA, thanks to the volunteer work of Mark Lenci and others in the club, and the Rhode Island marine industry.

“I have wondered why friendships formed at sea have a special quality. I think there are many reasons. The sea itself is captivating and ever-changing. It takes us beyond the world we know. It may be that the people who find the challenge and fun of leaving the comfort of land for a forbidding mare incognitum already have a lot in common. The shared adventure reinforces innate bonds. We mere mortals are not in control of the sea, but we test our preparations and trust in those aboard to handle all that needs to be done to complete the voyage. Overcoming hardship through perseverance builds confidence in oneself and mutual reliance among a small crew.

“For some reason people open up about themselves at sea, especially on night watches where a cockpit is both intimate and far from societal constraints. I have listened to men discuss whether to get married, and women share their concerns for their children’s ability to succeed. I have listened to a World War II Navy veteran talk about being captured and sent to a POW camp in North Africa. I greatly value the shipboard friendships between generations. I became friends with sailors older than my parents and now can have that same rapport with sailors at the beginning of their offshore adventures.

“I believe in making the sport better and making an understanding of our maritime heritage more accessible, and have become a chronic volunteer for the many aspects of sailing that I believe in. Unlike most countries which have a governmental approach to sport funding and instruction management, the U.S. evolved with a grassroots model for which volunteering is essential. I have benefited from the hidden work of those who have given time and expertise through many organizations. I find great reward for doing my part alongside so many others.

“The best thing about sailing is the slew of activities one can pursue as a sailor over a long lifetime—dinghy racing, big boat racing, passage making, cruising, kiteboarding, frostbiting, experimenting with technical innovations, and getting to know all the variety of boats and sailors—young and old—that one encounters near home and in harbors around the world. I have received more in friendships and opportunities through sailing than I have yet to give.”