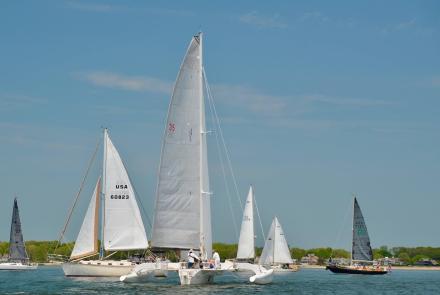 The Essex Yacht Club, Essex CT, has announced the running of the 70th Annual Sam Wetherill Trophy Overnight Race to be run on May 20, 2022.

The Wetherill, named after a founding member of the CCA, Sam Wetherill, (also Commodore of the Essex Yacht Club in 1941 and 1942) is the longest-running yacht race that honors a CCA member by name.  First run in 1952, after Sam’s death in 1951, the race has featured various ocean courses and has been contested annually.  In 2021, the course was lengthened to approximately 140 nautical miles, and the fleet now starts south of the Saybrook Point Lighthouse, proceeds to the G31 mark, 1.6 nautical miles northwest of the Gay Head Light on Martha’s Vineyard, and returns to Saybrook, leaving Block Island to starboard.  The course is contested almost completely in ocean waters, with only a few miles of the start and finish sailed in the Sound.  The Wetherill is an excellent early preparatory race for those competitors who plan later offshore races, including the Newport Bermuda Race.  Multiple trophies will be awarded, in addition to the Sam Wetherill Trophy for the overall winner on corrected time. Trophies will also be given in doublehanded, multihull, and nonspinnaker classes.  Entries can be made on Yachtscoring; twenty-five yachts are already entered.

According to John Rousmaniere, past Historian of the CCA, Sam was “a founder of both the CCA and the Bermuda Race . . . a pioneer and leader in establishing Corinthian ocean racing in America.”  In his contribution to the 1987 book by the Technical Committee of the CCA, Desirable and Undesirable Characteristics of Offshore Yachts, edited by Rousmaniere, renowned yacht designer and CCA member Olin Stephens II wrote that, as a young designer, he followed and was influenced by the writings of Sam Wetherill, who advocated for the development of small yachts (at this time considered anything no smaller than 40 feet at the waterline) for ocean racing.  Stephens stated that he was also influenced by the writings of Herb Stone and Bill Nutting, also founding CCA members, who along with Wetherill served in subchaser boats during World War I. These boats had overall length of approximately 110 feet and a beam of only 15 feet; they were difficult to control in heavy seas.  It is probably no coincidence that Sam and his subchaser colleagues became interested in the problems of stability of small racing yachts at sea and worked to encourage designs that improved stability and safety.     Sam was awarded the Navy Cross for his service commanding a subchaser, and he achieved the rank of Lieutenant Commander.

Sam became an editor at Yachting magazine, editing, among other columns, the influential design section, where new ideas about ocean racing in small boats were debated.  According to John Towle in his history of the CCA, serialized in the CCA Gam, Wetherill, in the early days of the Bermuda Race, was often found in Hamilton “in someone’s cockpit playing his ukulele and singing the favorite Navy chanties—The Yankee Subchaser Squadron and Have You Heard About the Ocean Race in June.”   In the 1930’s Sam moved to Essex, successfully raced his 32-foot ketch Tidal Wave, designed by CCA member Phil Rhodes, and became Commodore at Essex Yacht Club.  According to articles in Motor Boating magazine in 1930 and in 1932, Sam and Tidal Wave won races from the western Long Island Sound out and back around points east, both to Cornfield Light Vessel (near Saybrook) and around Block Island, where competitors could use engines in light air, limited by the amount of gasoline that could be carried.

Sam died prematurely in 1951 at the age of 66, while anchored on Tidal Wave in Sag Harbor, NY, during a regatta, where he went overboard and drowned.  Exactly how and why he went overboard is unclear and is the subject of considerable speculation among the sailors at the Essex Yacht Club.  The first running of the Wetherill Race, in 1952, generated many entries from accomplished CCA sailors, including the winner, G W Blunt White, CCA Commodore at the time. He sailed his White Mist, a Sparkman and Stephens-designed 46-foot yawl, in which he then won the Buenos Aires to Rio de Janeiro race in the following year.  Other CCA members who won in subsequent early years were Benjamin DuPont on Rhubarb (1958 and 1959), Gifford Pinchot on Loki (1963), and DeCoursey Fales on Nina (1964).

This year’s Wetherill entries include several Bermuda-bound ocean racers:  the McCurdy and Rhodes 46 Froya, the J122 Blue Yonder, the new Neo 430 Rhumb Runner, the S&S 68 Black Watch, the J145 Spectre 4, the IMX 40 Reliance, the new X4 Maree, the Cal 40 Towhee, the Swan 46 Flying Lady, and others.