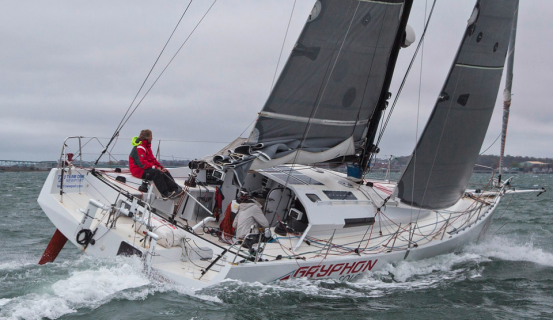 Offshore short-handed racer Joe Harris chairs the CCA Environment of the Sea Committee and has months of sea time using renewable energy on his Class 40 GryphonSolo2, which he sailed solo around the world in 2015-16. As he considers another RTW race, Joe looks at his alternative energy systems for areas of improvement, which may be useful on your boat as well.

We all share the desire for energy independence, so we can venture further without needing to refuel or weigh our boats down with diesel fuel. In addition, most of us would prefer to minimize the time our engine or generator is on due to the noise and heat generated, the fossil fuel burned, and CO2 produced. There are now many options available for sailboats to produce their own renewable energy including solar, wind and hydro-generation of electrical power to charge the batteries. 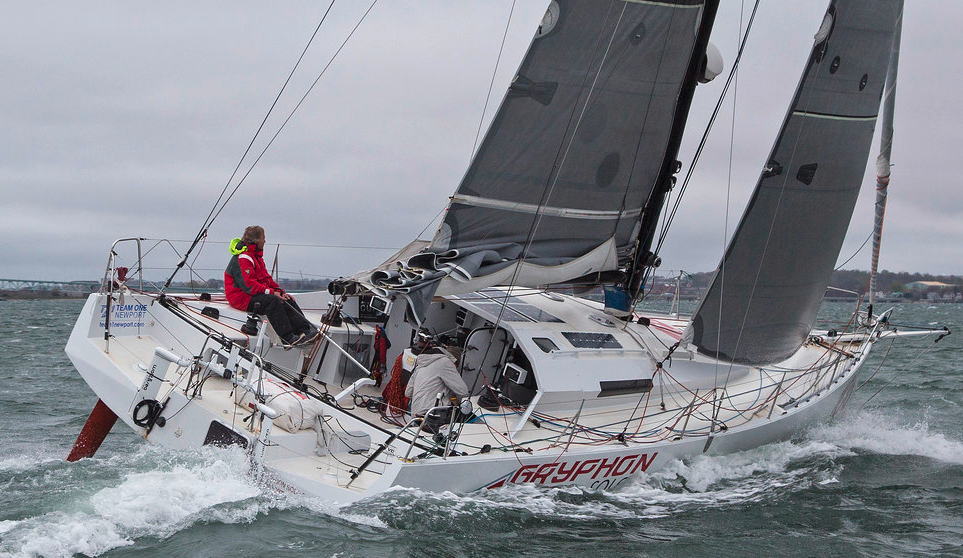 Equipped with hydro-generators on the transom and solar panels amidships, Joe Harris and GryphonSolo2 sail into Narragansett Bay after soloing 'round the world in 2016. Note: the sailor to the right has just climbed aboard to assist Joe on the harbor arrival. Billy Black photo.

After my solo sail around the world in 2016, I was about to hang up my racing spurs and buy a comfortable cruising boat, when all of a sudden two announcements came forth in the space of two weeks for RTW (round-the-world) races for Class 40s. The first starts in June of 2021 (www.globe40.com) and the second, in June 2023 (www.theracearound.com). I am now just waiting to hear that each race has the sponsorship and financial backing needed to manage the race. Fingers crossed that these races go, but in the meantime, I am looking at my boat to determine what improvements are needed to go around the world again. At the top of the list is my alternative energy systems, so let me tick through my thought process, which might help you think about your boat.

Here are my basic alternative energy systems on my Class 40 GryphonSolo2 (all systems were sourced and installed by Maine Yacht Center (Brian Harris, General Manager and former Open 60 and Class 40 preparateur) and Ocean Planet Energy (Bruce Schwab, Vendee Globe and Around Alone circumnavigator):

Solar panels:  I think solar panels are probably the best place to start your alternative energy system. I have six Solbian SP52 solar panels (total cost about $3,500) on my cabin top that are light and flexible and simply adhered to the deck with very strong, two-sided tape. Together they are rated to put out about 20 amps of power, but in reality, put out about 10 amps as each panel is never directly facing the sun. They do an excellent job of keeping my batteries topped up when I am away from the boat, and they augment my hydro-generator output when sailing offshore. The panels make no noise and require no tending or maintenance. They do require a charge regulator to regulate the amount of power they send to the battery bank.

My old panels have become a bit dirty and clouded, so I need to clean them to restore them to full productivity. These panels also get slippery when wet, so I did not put any in areas of the deck where I would be working a lot. However, panels are now available from Solbian that have a non-skid surface, so I am thinking of adding six more panels around the mast area in order to double the system output to about 40 amps (20 amps net). I use about 12 amps while sailing the boat with the auto-pilot steering, full electronics, watermaker, laptop and satellite communications going, so having the solar system able to stay ahead of that demand during the day will be huge.

Hydro-generators:  I have two Watt and Sea Cruising 600 hydro-generators (about $6,000 each), and I mount them port and starboard on the transom of GS2 and almost always have the leeward one down and the windward one up when sailing. These units are the workhorse of my charging system. I find that if the boat is moving through the water at faster than 5 knots, the drag from the hydro is not noticeable, whereas at very low boat speeds, there is some drag and boatspeed reduction. At 8 knots of boatspeed the hydro is putting out about 20 amps of power, which is more than enough for me to run the boat, with some to spare. 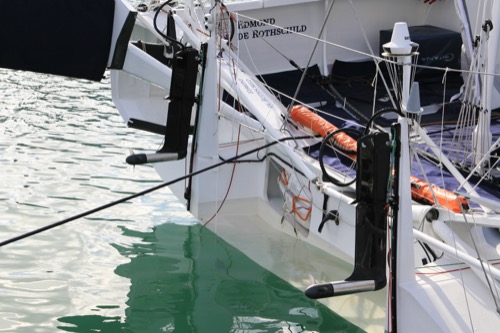 Watt & Sea hydro-generators are also made from carbon fiber and can be lowered into the water on tracks. This model has a hydraulically feathering propeller to match output to what the batteries need.

My hydros are not the fancy carbon ones that the Vendee guys all use—those cost nearly $16,000 each!  The weight of the aluminum is not too much greater than the carbon, but the “racing” model does have a hydraulically controlled mechanism to feather the prop so that the hydro will only put out as much power as the batteries need.

The hydro propeller turns and puts out AC power that is sent to a converter in the boat, which converts the power to DC to charge the batteries. That is where my system broke down during my last RTW trip as the converter over-heated when the boat was traveling at 15-plus knots for more than six hours. The new Watt & Sea converters have basic DC regulation capability, but I think I will use a timer with an alarm to be sure they don’t stay down beyond when the batteries are fully charged. I think my two hydros should be good for another lap with perhaps a few extra propellers, but I will check with the manufacturer on required maintenance.

Wind generators:  I don’t have a wind generator on my boat and I find not many race boats carry one. Wind gens need a lot of apparent wind to be really effective so when the boat is going downwind and there is less apparent wind, they are less effective. The main difference between wind and hydro generators is that the hydros consistently put out more power, as water is more viscous than air, so a propeller turning in water puts out more electricity than a propeller turning in air. Wind generators are also noisy and can get lines or body parts caught in them when things get chaotic!  If I had a cruising boat, I would probably put a wind generator on a post near the transom, like a radar post, but for a flat-out racing boat, I think they have too much windage and somewhat redundant with the hydro.

Alternators and batteries: I have two alternators—one 40 amp to charge the engine battery and one 120-amp Balmar (with Balmar regulator, combined cost about $1,000) to charge the house batteries. For the house batteries, I have three 100-amp hour AGM batteries (cost about $250 per battery, so $750 for 3). When I need to charge due to light air, slow boatspeed, and no-sun conditions, I typically start the engine and run it at around 1700 RPM, which will charge a 40-percent-depleted house bank of batteries in about 60 minutes. I try to use the engine as little as possible when offshore as I only have 20 gallons of diesel in the tank, although I typically will carry two, 5-gallon jerry jugs on long trips for insurance. Moving to a lithium-ion battery bank would make sense due to their depth of discharge (80 percent vs 50 percent for AGM), shorter charge-up time, longer life and lower weight, but Class 40 rules prohibit their use due to the excessive cost (about $3,800 for 300 amp hours). 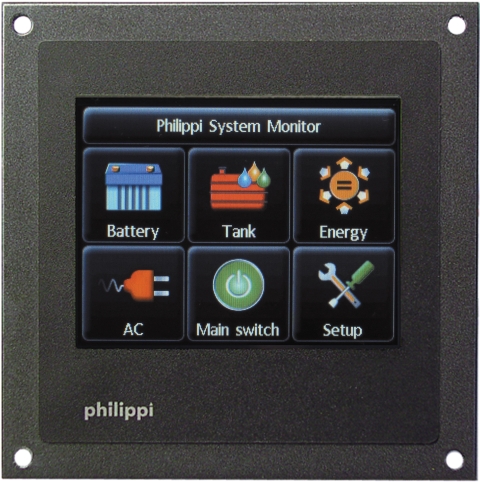 The Philippi System Monitor keeps track of battery status as well as the output of each energy-producing system.

System monitors:  I use the Philippi System Monitor, which was recommended by Bruce Schwab and works well. It lets me know the condition of my engine and house battery banks at all times and also shows me exactly how much power is being produced by my solar, hydro and engine alternator systems. I have found it particularly helpful in diagnosing a problem with my engine alternator-regulator system as I am able to watch the entire charge cycle to see how much power is being delivered to the battery bank as it becomes charged. This monitoring system is a key to managing the multiple charge inputs and keeping the batteries in good shape while not overcharging.

Fuel Cells (area of research): I am interested to learn more about fuel cells, as I know some of the Class 40 fleet uses them and think they are great. Fuel cells produce electricity from a methane or propane fuel source and may be a nice addition to solar and hydros, particularly in light air/ slow boat-speed conditions. However, with weight an overriding concern and detriment to boat speed, a “weight-benefit” analysis must be performed before purchase/installation.

Conclusion: My recommendation to offshore racing sailors is to start thinking about these alternative energy systems, as they are a terrific way to reduce fuel consumption and become more independent while racing, without sacrificing much in performance. They become imperative if you are traveling a very long distance and can’t carry enough diesel to charge twice daily for the length of the passage.

Offshore short-handed racer Joe Harris chairs the Cruising Club of America’s Environment of the Sea Committee and has many months of sea time using renewable energy on his Class 40 GryphonSolo2, which he sailed solo around the world in 2015-16.