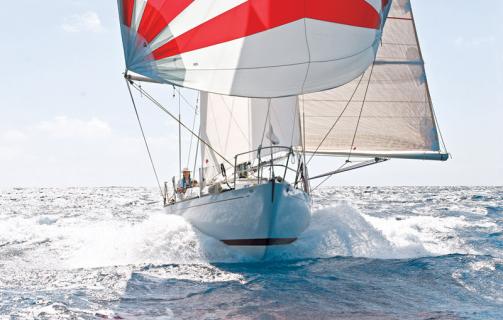 Different boats, especially as startlingly different as the 100’ Comanche, may have to modify the standard techniques for various safety maneuvers. CCA Members Stan and Sally Honey, among the most successful CCA racers on their Cal 40 Illusion, have thought long and hard about the best way to get one another back on board after an overboard incident. They’re quick to point out that all COB methods may have to be customized for different boats, the number of crew (please, God, let it be more than one...) and the skill level of the sailors.

With those caveats in mind, here is the Station Bill for a doublehanded COB incident on Illusion:

Comments from Stan and Sally:

The above requires the Lifesling line to be shorter than 2x the mast-height and requires the spinnaker halyard to be long enough to reach the stern.  It appears in trials that even with a 1:2, and with the sort of geared halyard winches that are found on >=35 foot boats, small sailors can hoist a MOB over the rail.

Even if the sailor onboard can’t get the MOB entirely over the rail, the MOB will be hoisted head and shoulders above the water next to the boat and the boat won’t drift over them.  The sailor onboard would then have time to connect a 1:1 halyard, or a tackle on a halyard.

The extra-long spinnaker halyard may also be useful for recovering a person dragging overboard on a tether using a similar technique.  To recover a sailor attached by a tether: slow the boat, hook the halyard to the bight of the tether outboard of the lifelines, hoist.  Robin Knox-Johnston states that this approach has worked best in the Clipper and has been used several times.

The Cruising Club of America is a collection of passionate, seriously accomplished, ocean sailors making adventurous use of the seas. All members have extensive offshore boat handling, seamanship, and command experience honed over many years. “School of Hard Rocks” stories, published by the CCA Safety and Seamanship Committee, are  intended to advance seamanship and help skippers promote a Culture of Safety aboard their vessels.