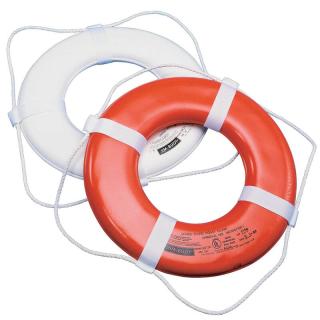 When Stan Honey and I sailed on Playstation in 2001 in an attempt to set the East to West TransAtlantic record under sail, each of the crew was given a small waist pack custom-made by a local sailmaker that contained the gear we would need if we were to go overboard, as well as for routine duties on board. The contents were as follows:

A small Class B EPIRB, designed for MOB use. (Playstation had an Automatic Direction Finder which, in principle but not in practice, would allow the navigator to home in on the signal.)

A dive knife worn on our belts, with serrated and straight edges, ostensibly to allow us to cut through the trampoline if we found ourselves on the wrong side if/when the boat capsized.  Practice had shown that to be difficult even in daylight when you knew when to get your breath.

Regardless of the conditions we found ourselves in (generally cold, windy, and miserable), we would wear the waist pack where it was accessible, over our bibs and smocks, and below our life jackets and harnesses.