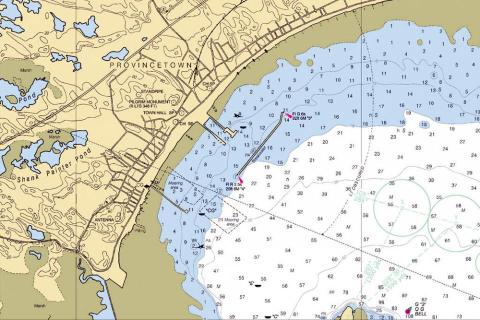 CCA Safety Moment for May 2021

While flying from Costa Rica to Los Angeles recently, the coast of Baja California came into view and, as a confirmed window-looker, I tried to identify the coastal features that I was seeing. My seat was on the left side of the plane, so I was flying over land, and looking out to sea. As it had been about forty years since I had regularly sailed race boats from southern California to Cabo San Lucas, I was drawing on some pretty distant memories of Mexican nautical charts and whatever we could see from the cockpit of a 67 footer.

A point of land appeared out the window that looked like Punta Abreojos, one of my favorites, since not only does the translation of its name get attention (Open Eyes!), but there used to be a rusting ship on the leeward side of the point to drive the point home. Soon thereafter, a reef appeared a short distance offshore which I identified as Sacramento Reef, notorious as having an inoperative light at all the worst imaginable times.

Old memories flooded my mind as I watched the coast roll by and, although the sea was surprisingly light blue, and calm, it sure looked familiar. Then my memories and my confidence was shattered by the appearance of distant mountains out on the horizon. It took me about 30 seconds to realize that I had been gazing at the Mexican mainland shore of the Sea of Cortez, and not the Pacific shore of Baja California, and I had convinced myself that features that I identified were those that I sailed past four decades ago.

I think we do this more often that we admit. Armed with a small amount of misinformation, we concoct a story to fit what we think we see and then twist additional evidence to comply. Sailing up the California coast when I was 21, our DR position put us about 20 miles south of Diablo Canyon, the new nuclear power plant near San Luis Obispo. As the fog lifted and the unmistakable power plant came into view, our first reaction was that there must be TWO nuclear power plants on the coast. That seemed more likely than an inaccurate running fix.

Psychologists call this confirmation bias, which is the tendency to interpret new information so that it confirms your pre-existing thoughts. You think you’re on the coast of Baja, so the features you see confirm your hypothesis. You see a lighthouse with a 20 second period and your first reaction is that the lighthouse is somehow “off”. You hear a depth alarm when you know you’re in deep water, and you assume that it’s picking up a school of fish or a thermocline or a submarine, but it’s very unlikely that you’re about to run aground…

In 1923, a convoy of 14 relatively new navy destroyers steamed from San Francisco to San Diego in dense fog. Led by Capt Donald Hunter aboard the USS Delphy, the destroyers traveled at 20 knots in close formation. At what he believed to be the appropriate time, Capt. Hunter turned to a course of 095, which he believed would lead the convoy down the Santa Barbara Channel, based on his dead reckoning position.

USS Delphy was equipped with a radio navigation receiver, but her captain, Lieutenant Commander Donald T. Hunter, who was also acting as the squadron's navigator, ignored its indicated bearings, believing them to be erroneous. No effort was made to take soundings of water depths using a fathometer as this would require the ships to slow down to take the measurements. The ships were performing an exercise that simulated wartime conditions, and Captain Watson also wanted the squadron to make a fast passage to San Diego, so the decision was made not to slow down. Despite the heavy fog, Commodore Watson ordered all ships to travel in close formation and, turning too soon, went aground. Six others followed and sank. Two ships whose captains disobeyed the close-formation order survived, although they also hit the rocks.[7]

Of the 14 ships, seven were sunk with the loss of 23 sailors, two were able to extricate themselves from the rocks, and five avoided grounding.

If we know that confirmation bias is a “thing” that we might fall prey to with potentially dangerous results, how do we defend against it? How do we not accept the obvious, easy, logical answer and strive for the proof-positive confirmation that eliminates the erroneous conclusions? Here are some thoughts: