A Perspective on Seamanship 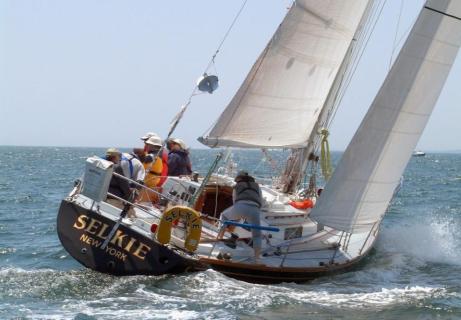 A Perspective on Seamanship

Seamanship is usually described as a litany of skills and knowledge of boat handling, navigation, deck work, and systems maintenance. The combined crew should be able to cover all of it. Ideally the boat is in better shape at the end of the trip than the beginning.

I would add that good seamanship should include the ability to assess, address, and anticipate. The best offshore sailors use sight, smell, hearing, and feel to monitor what is going on below, on deck and in the wider environment for whatever may come next. Experience lets the crew member distinguish the significant concerns from normal variations. In a perfect world, every issue would be caught before it becomes a problem or emergency. Let’s snap back to reality—it’s not going to happen that way. Good sailors train themselves by running through “what-ifs” as an exercise on watch:

What if an incoming call alarm sounds from the DSC VHF radio?  What if my watchmate seems uncharacteristically slow to respond?  What if I hear a pump cycling?  What if the chart plotter fails? What if I smell something pungent and slightly acrid? What if we had to launch the life raft and get the stuff that goes with it? One can mentally practice the first three to five appropriate steps to take in each of these cases and so many more. The steps include the activating the response team, establishing on-board and outside communications and utilizing tactical boat handling or changes in procedure.

All passages begin and end with land. Visitors need to be prepared to abide by local environmental and harbor regulations, as well as immigration, customs and border protection laws. Before heading out, give crews the heads up on passport and visa requirements for all countries on the itinerary. Research the vessel clearance requirements well before setting out and plan accordingly. Review all the ship's documents and have official contact information for clearing out of Bermuda and into the U.S., Canada, or farther afield.

A return trip from Bermuda to a U.S. port of four to five days is within a pretty reliable weather window with today's forecast abilities. (Attend the weather briefing at the Royal Bermuda Yacht Club.) While most boats head straight home after several days of fun on this most hospitable island group, it’s possible to arrange to leave a boat in Bermuda for an extended period—normally up to 90 days—provided someone is designated to look after her. This may be a better option than forcing a departure into risky weather or with short-handed crew just to meet a deadline.

Sailing at sea is most rewarding. The adventure should be satisfying, not one of confusion, mistakes, oversights, and damage. After sailing over 100,000 miles offshore, my favorite passages have humorous, rather than harrowing, sea stories. It’s a goal worth pursuing for you, your crewmates, and those waiting for you ashore.

Maybe I’ll see you out there.

The Cruising Club of America is a collection of accomplished ocean sailors having extensive boat handling, seamanship, and command experience honed over many years. “Safety Moments” are written by the Club’s Safety Officers from CCA Stations across North America and Bermuda, as well as CCA members at large.  They are published by the CCA Safety and Seamanship Committee and are intended to advance seamanship and safety by highlighting new technologies, suggestions for safe operation and reports of maritime disasters around the world.

By
Sheila McCurdy
Culture of Safety
Seamanship and Awareness