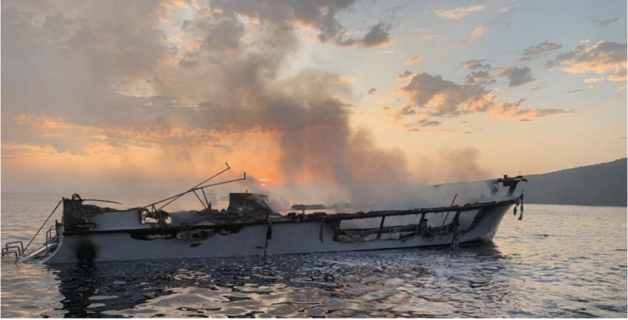 With the recent indictment of the Captain of the Conception due to the loss of life during the fatal fire on board the dive boat on September 2, 2019, it is timely to consider how we have our vessels set up for charging the batteries on portable equipment.  The National Safety Transportation Board review pointing at the charging battery powered devices as a probable cause of the fire should be a reminder of the issues involved in managing gear on board any boat.

While the US Coast Guard has yet to issue their report, the NTSB noted that the Captain was negligent as there was no evidence of a watch keeper on duty at the time the fire was discovered.  This is the basis of the indictment for seaman’s manslaughter by the Grand Jury.

As the list of rechargeable equipment grows and the quality of batteries, charging elements and the devices themselves is not easily available to the public, we are almost the canaries in the coal mine when it comes to how to handle this gear on a vessel.  We know that the basic items we are seeing on boats is growing, and the equipment we purchase and bring on board may be manufactured by reputable companies.  What we don’t use are best practices when we recharge these devices.

Consider that every manufacturer is building their gear as if it is the only device plugged in to recharge.  Then consider the locations of AC power outlets, the wiring behind those outlets and the circuit breakers we have trusted to protect us.

The element of heat generation is a real area for focus.  Each device generates heat when charging.  The heat is most often concentrated in the battery area of the device.

Some devices have had serious fire problems when charging.  Just remember the FAA ban on Samsung Galaxy 7s and over 100 fires reported on airplanes!

Lithium Ion Battery fires can be catastrophic, especially when they occur in a contained location or vessel. (think airplane, boat or car). Many documented cases of fires are in the public forum.

Here is what happens:

Whenever a Li-ion battery explodes or catches fire, it’s undergoing a process called thermal runaway. This process can be a bit difficult to understand, so we’ll keep things short, sweet, and free of dense scientific jargon.

Lithium-ion batteries contain a ton of Li-ion cells. Each of these cells has a critical temperature—think of it as a boiling point. When the critical temperature of a cell is reached (due to external heat, overcharging, damage, or poor manufacturing), it enters an exothermic breakdown. Basically, the cell itself starts to release a ton of heat.

This kicks off the process of thermal runaway, which is essentially a positive feedback loop (like when you put a microphone next to a speaker). Once a cell enters exothermic breakdown and releases heat, its neighboring cells are destined to hit their own critical temperatures. Depending on the speed of this process, a battery could quietly sizzle out, catch fire, or create a minor explosion.

Now that we understand the process of thermal runaway, it’s a lot easier to pinpoint how, when, and why phones (among other Li-ion devices) explode.

If your phone or another device has a swollen battery however, you’ll want to do something about that right now.[1]

So, how does the airline industry handle fires with Li-ion batteries?

At first, commercial airliners were outfitted with special bags designed to hold a laptop computer that was going into an overheated condition. It was recognized that a fire on board a commercial airplane is potentially catastrophic. Containment and extinguishing are the two key elements of firefighting on airplanes.

John Cox, CEO of Safety Operating Systems spoke at an NBAA-BACE (National Business Aviation Association – Business Aviation Convention and Exhibition) education session in the Innovation Zone.  His comments were reported in a piece from the NBAA web site.[2]

There’s no way to predict when a thermal runaway is going to occur, igniting a lithium battery fire. A thermal runaway starts from an internal short that may be caused by a manufacturing defect, physical damage or heat.

A phone may be small, but the safety risks from its battery can spread quickly throughout an airplane. And lithium batteries are also used in laptops, tablets and most rechargeable devices.

“In an inflight environment, we’re not only going to have to deal with fire, the resultant damage and smoke, but also panic,” said Cox.

Rechargeable batteries contain a lithium ion gel. The gel is sticky, and its heats to about 1,000 degrees Fahrenheit in a thermal runaway, so it results in immediate second-degree burns. “People nearby are in harm’s way,” said Cox. “It’s bad enough if the firefighter is a flight attendant, what if it’s a pilot?”

A lithium battery fire also releases an ether-based vapor that’s highly flammable. The chemical reaction of a thermal runaway can release hydrogen and oxygen byproducts, “So this process creates its own fuel, its own ignition and its own oxygen,” said Cox.

What to Do With a Battery Fire

Given the risks, Cox said aircraft operators need to ensure crewmembers are correctly trained to deal with battery fires.

Halon alone only extinguishes the open flame from a battery fire. It does not stop the thermal runaway. “The only option to stop this chemical reaction is to cool it or contain it,” said Cox, “otherwise, it will continue until every cell in the device has expended itself in [a series of] virtual explosions.”

The FAA recommends cooling the device with water (even though pouring water on an electronic device is counterintuitive to most people). Halon and water together are the best ways to fight a lithium battery fire.

“The first step is to contain the fire,” said Cox. “The next step is managing smoke. The vapor from these fires is toxic, it’s a mucous membrane irritant and it’s carcinogenic.”

Business aircraft operators sometimes carry fire resistant burn bags, but the FAA strongly cautions against putting lithium batteries in these bags. Not all bags are airtight and the smoke can still escape, but more importantly, putting the device inside the bag can trap the heat, making the chemical reaction worse.

In conclusion - it appears that the best practices include:

Mark Roye’s comments in introduction of this piece:

Attached is a Safety Minute presentation from Bruce Brown, Safety Officer SOCA Station.  It is particularly timely after the disastrous fire with many lives lost on the dive charter boat Conception little more than a year ago. Please consider using Bruce's piece as appropriate for your station.

There are some important elements in Bruce's submission that all must consider when charging lithium-ion battery powered devices aboard boats. Bruce points out and emphasizes in his summary conclusions the importance of proper circuit protection (breakers or fuses) in the charger power supply, and the importance of not charging multiple devices by way of "power strips".  This must be given particular consideration, not because chargers for these devices draw so much current, but because they draw so little.  A typical computer battery charger draws only 1.5 amp AC, and many phones as little a .5 amp.  It is very rare to find AC circuit breakers rated for such low current draw, and consequently many circuits may be installed with inadequate circuit protection prepared to trip off at the low ampere draws critical to these devices.

Aboard boats an alternative may be to charge with a DC charger, or by way of a DC powered USB charger in the case of cell phones. When using this option one can easily find DC circuit breakers rated down to 1 amp, or it is possible to protect the DC circuit with an in-line AGC type fuse to even lower current draw.

Another prudent practice aboard a boat (since one cannot simply walk out the door and dial 911!) is to place the device being charged on a non-flammable surface.  As Bruce points out, when these batteries fail, they can generate very high heat.  It is this heat that ignites other materials, possibly resulting in a catastrophic fire.  Placing the device atop the galley stove when not in use can prevent any such heat generated from igniting a flammable surface.  Friends of mine, whom we met cruising in Patagonia, have two home-schooled teen-aged girls who must frequently charge laptop computers and other devices.  The practice on their boat is to put the devices on a large baking sheet, and place the steel baking sheet atop a few of the now common silicon rubber high-temperature pot holders, This practice insulates the underlying counter-top from possible heat from a runaway battery.

Bruce also points out that water is essential for fire fighting, as it is of paramount importance to quickly reduce the high temperature of the material.  Airline crews are taught to use soda water for this purpose.  Keep in mind that contrary to a popular misconception, these batteries are not made of lithium metal. Therefore a Class D fire extinguisher intended for burning metals (which few of us have aboard anyway) is not effective.  Pulling away heat as rapidly as possible is essential, and water is effective at doing so. Lithium-ion batteries are considered a Class B fire, and in addition to water a standard ABC or BC dry chemical fire extinguisher is appropriate. If charging on an AC circuit, shut off the power before using water.

Finally, as Bruce points out, it is essential to maintain a careful watch and never leave the devices unattended while charging.  It is a good practice to check to determine if any unusual heat is being generated during the charging cycle, and to avoid over charging.

With the very high popularity and usefulness of all of these devices they certainly have their place aboard.  But they must be considered a potential hazard and treated appropriately.

Best regards to all,