Rich Wilson (Boston, Mass.) has been awarded CCA’s Special Recognition Award, first given in 2006, honored the “highly meritorious and extraordinary nautical accomplishments” of Wilson in two Vendee Globe Races. The solo, non-stop race around the world is the toughest sailboat race of all, and Wilson is the only American to have finished two of these. He finished ninth (among 30 starters and 11 finishers) in 2008/’09 and 13th (among 29 starters and 18 finishers) in 2016/’17, becoming the oldest person ever to complete the race. 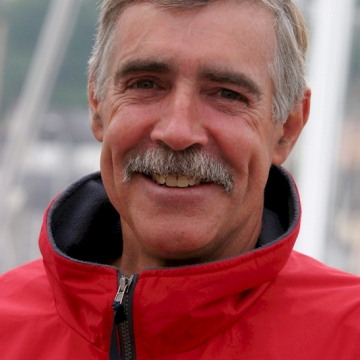 “The Vendee Globe is the greatest sailing race in the world,” said Wilson, a longtime CCA member who took 121 and 107 days, respectively, to finish the two races. “For the French, it is a human adventure first, a race second. They have their favorites for sure, but they don't really care where you finish, just that you sail your best, tell them the story from sea while they are at home on land, and that you come home."

As an interesting bookend to Wilson’s designation as “oldest” in the 2016-7 Vendee Globe is his designation in 1980 as the youngest skipper to win the Bermuda Race. He also made three record-breaking ocean passages for which he won CCA’s 2004 Blue Water Medal. They were: San Francisco to Boston in 1993, New York to Melbourne in 2001, and Hong Kong to New York in 2003.

In 1990, Rich formed sitesALIVE to use ocean sailing, as well as other real-world, real-time adventures, expeditions and field research stations, as an exciting and engaging educational tool for teaching children about science, geography, math, and history  For the 2016/’17 Vendee Globe, sitesALIVE had 750,000 students, in 55 countries, with the website updated daily in four languages (English, French, and Chinese traditional and simplified). Live, interactive content with Wilson aboard Great American IV, and a team of 15 Experts globally included daily audio, ship's logs, biometric and ship's data, formal teaching essays, Q&A, photos and videos, all coordinated by the 64 page Teacher's Guide with classroom activities correlated to educational standards.

For 2006 the Board of Governors has authorized a Special Recognition Award for meritorious service to the sailing community in the development of the Airmail/Sailmail/Winlink high frequency radio systems. The systems they developed enable those at sea to send and receive e-mails as well as weather information, thereby contributing to increased safety at sea. Thousands of sailors are now utilizing these systems and benefiting from their efforts and accomplishments.