OPEN TO ALL CLUB MEMBERS!

Join CCA Member Bill Barton and his crew on his Sabre 362 sloop, Tazzarin, as he undertakes expeditions under sail to the Western North Atlantic’s most isolated and remote outpost, Sable Island. Their quest is to search for evidence of attempts at early settlement or shipwreck survivor camps on this crescent isle perched on the edge of the continental shelf some 180 miles southeast of Halifax, Nova Scotia. Known as the “Graveyard of the Atlantic,” Sable Island has seen over 300 shipwrecks spanning five centuries which Barton’s team has researched and documented over multiple voyages.

Today the isolated island is home to seals, birds and wild horses which have lived there for centuries. Sable remains essentially deserted except for a small government station situated on the site of the lifesaving service that was started on the island in 1801 with desperate hopes of stemming the never-ending series of shipwrecks. Sable’s maritime tale is a blend of past perils and a present paradise of wildlife, sand dunes and flora, all tenaciously clinging to existence amidst ocean storms and the threat of rising sea levels.

Zoom link will be posted the week of March 15th.  RSVP to BOS Station Secretary Nick Orem at ccabostonstation@gmail.com in order  to receive the link by email as well. 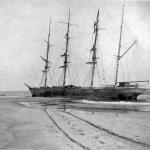 Bill Barton has been a CCA member for 35 years and was Chairman of the Centennial Newport Bermuda Race in 2006.  He works as an author/writer and a management and information technology consultant; although, much of his career was in museums and alternative educational organizations in the maritime arena. Today he gives some of his time as a board member for the 1926 Gloucester dory fishing schooner, Adventure. In recognition of Bill’s expeditions, writing, public presentations and research, he is a National Fellow of the Explorers Club.