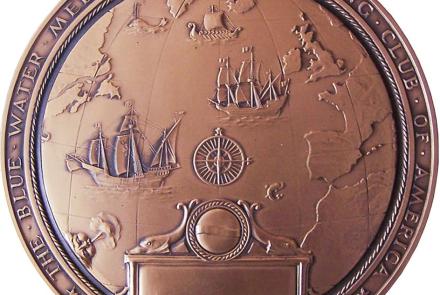 Ginger and Peter Niemann have been named winners of the 2021 Blue Water Medal by the Cruising Club of America for two sailing circumnavigations that took them to the high latitudes, north and south. Due to the COVID-19 pandemic, the second trip around the world included rigorous non-stop passages while returning home to Washington state.

The Niemanns exemplify the spirit of adventure and determination represented by the Blue Water Medal, which has been awarded regularly since 1923 to “reward meritorious seamanship and adventure upon the sea displayed by amateur sailors of all nationalities, that might otherwise go unrecognized.” Past winners have ranged from Eric Tabarly and Sir Francis Chichester to Rod Stephens, Webb Chiles and Eric and Susan Hiscock.

The Niemanns’ first voyaging boat was Marcy, a 47-foot sloop they converted from a schooner. From 2006 to 2010, Marcy took them west-about from Seattle almost 50,000 miles around the world, including rounding the Cape of Good Hope and Cape Horn. 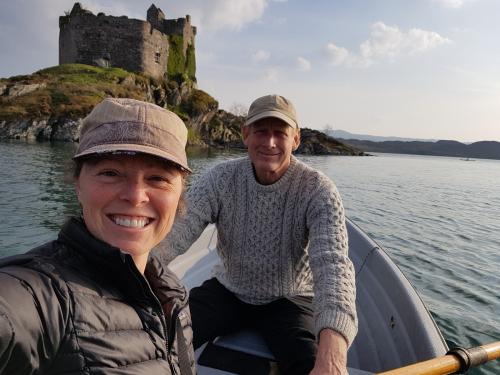 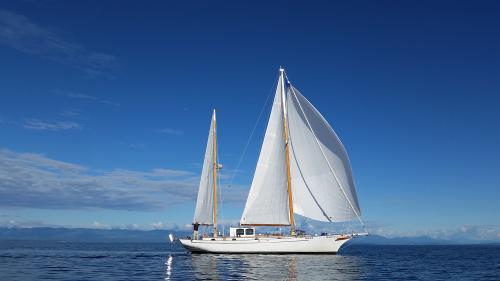 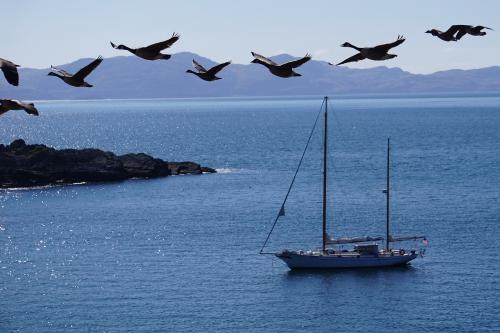 Irene in the Northwest Passage (top, photo credit Jan Wangaard); the Niemanns at Tioram Castle, Scotland; Irene in Holly Isle, Scotland (with geese); Irene under sail in Georgia Strait. All photos by Ginger Niemann unless noted

In 2017, they departed Washington State on Irene, a 52-foot fiberglass ketch. Taking the opposite direction, east-about, through the Northwest Passage and staying in the northern hemisphere, they never crossed their first track around. Becoming the 30th U.S.-flagged vessel to complete the Northwest Passage transit, Irene touched Greenland, Newfoundland, and the U.S. East Coast before crossing the Atlantic to Ireland.

After touring the U.K., Atlantic Europe, and the Mediterranean, they found themselves suddenly stranded in Turkey when the COVID-19 pandemic began. Like international cruisers everywhere, they were stopped in their tracks, previous plans irrelevant. Unwilling to leave Irene, they considered staying in Turkey; sailing back home across the Atlantic; or heading home to the Pacific Northwest through the Suez Canal. They chose the third option, negotiating a landfall in distant Batam, Indonesia. Their of-necessity-non-stop voyage across the Indian Ocean during the monsoon to Indonesia required extraordinary perseverance. It was rough, as they had expected, but at least their worries didn’t include pirates, who were unlikely to be out and about in the challenging weather.

Two non-stop months and nearly 6,000 miles later, the Niemanns arrived in Batam, only to find that their permission to stay in Indonesia had been revoked. Nearby Singapore let them stay but they couldn’t leave the boat. They lived onboard at the Changi Sailing Club for five months. In all, they spent nearly 300 days aboard, unable to go ashore in any country. On February 2, 2021, they departed on the long cruise home via Japan and the Aleutians.

Despite the truly unique challenges posed by the pandemic, Peter and Ginger persevered, cheerfully adapting to a seemingly endless onboard quarantine and making lengthy passages in extremely difficult conditions.

They have coped with challenges posed by wind and weather, taken on the high latitudes in the Arctic and Patagonia, and found a way to successfully navigate the pandemic to complete a second circumnavigation in extraordinary circumstances. Their teamwork, courage, good humor, flexibility, and innovative spirit are evidence of their exceptional personal and sailing mettle. During these uncertain and difficult times, their persistence and ingenuity is truly inspiring, and the Cruising Club of America is proud to present them with the 2021 Blue Water Medal.