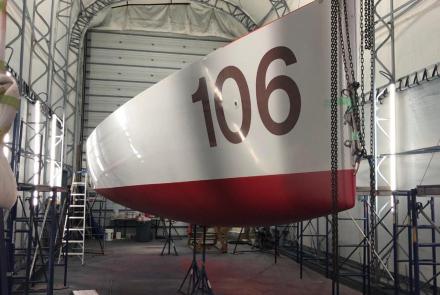 A note from Joe:

“Hello Friends: the article below is the third in a series of articles about my preparation of my Class 40 GryphonSolo2 for the Globe40 round-the-world race, which starts in June 2021 and finishes in March 2022. Hope you enjoy it.

Also, as an update to the work of the CCA’s Environment of the Sea Committee, we have become quite involved with the plight of the North Atlantic Right Whale, which is nearing extinction due to frequent entanglements with lobster trap lines. We have become advocates of work being done by Dr. Mark Baumgartner of WHOI, who is pioneering the R+D effort into “Ropeless Fishing”, which would eliminate the vertical rope in the water. For more info on this concept, check out this link [gear-fund.org ] and please consider making a contribution to the Gear Location Marking Fund.

In my first report in July, I was interviewed by Sailing World’s Dave Reed about how I decided to sail around the world again. In the second, ”Countdown to a Second Circumnavigation,” I described our last training sail of the year, on a balmy day in September in Portland, Maine.

But before proceeding to article 3, a quick note: There were three photos in the last report taken by noted marine photographer Billy Black that were not given proper credit initially. This was an oversight on my part and I feel awful about it since Billy has been a huge supporter of US offshore short-handed sailing going back to the 1980s days of the AroundAlone Race. Billy and his wife and business partner Joyce have chronicled every major ‘round-the-world race as well as being huge supporters of the Atlantic Cup Race, which is America’s premier Class 40 event. So thank you Billy and Joyce for your years of support; we all appreciate it very much.

GryphonSolo2 had her mast removed and came out of the water in early October at Maine Yacht Center in Portland. She had her keel and rudders removed, was rolled into the paint shop and then blocked about 4 feet off the ground. The plan was to have the non-skid deck paint re-done and to sand and repaint the bottom. However, as the boat is coming up on 10 years old and has been around the world once, we did a complete inspection, sounding, and survey of the hull and deck.

Our inspection uncovered several areas of delamination where the core material (balsa or foam) had separated from the inner and/or outer skin of fiberglass. When this separation occurs, the structural integrity of the hull or deck is compromised and must be fixed, or the problem will only get worse. The composites team at MYC is top-notch, and they have seen and repaired this type of delamination problem in race boats many times before, so they set to work and moved quickly through the stages of the repairs.

The photos (all courtesy of the MYC team) tell the story :

On the deck, we removed all hardware (winches, jammers, padeyes, etc.), sanded the deck back to the primer and repaired all damaged areas.

All non-skid areas were taped off and the painting began with two coats of primer, sanding in- between, then three coats of non-skid.

You can see from the photo that the foredeck area had to be done in “International Orange” with the hull number 106 so that if the boat was in distress, it could be seen and identified by a plane or helicopter.

The finished product looks like a new boat, and the sticky non-skid deck surface will provide secure footing for my co-skippers and me when offshore, even when wet.