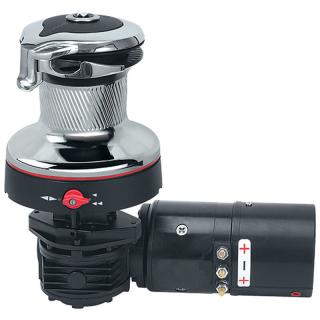 This Safety Moment looks at some of the gear on a charter catamaran that, in the wrong hands or if used incorrectly, could do substantial damage. Charter boats, by their nature, can be mysterious craft for the week that you’re aboard, as you discover vital aspects of the boat that might have taken the first year of ownership had the boat been your own.

In my most recent case, our Moorings 4800 cat was equipped with two large Lewmar electric winches that provided sail handling power for every line except the mainsheet, which had its own unpowered winch. These powerful electric winches were operated by a tiny floor-mounted pushbutton that ostensibly was toe-operated, and which had a cover to prevent accidental operation. The potential risks with an electric winch are many, especially in the hands of an unfamiliar sailor.

To protect the innocent, and to make this a positive rather than a negative message, allow me to tell you what I learned from spending a week sailing with these winches. There’s no question that life aboard is easier with powered winches on a very heavy catamaran, especially when raising the fully-battened, bullet-proof mainsail, which used to take three of us about ten minutes of swearing and sweating.

The point is that electric winches can make us over-confident in our sailing abilities, even as they open new opportunities to sail boats with smaller, and possibly older, crews. Like any tool on board, they require operational knowledge and a healthy amount of respect. Taking 30 minutes to go over their operation, at the expense of teaching the “Old Salts” something that they will claim to know already, is extremely worthwhile. Even Old Salts can benefit from a little continuing education once and awhile.