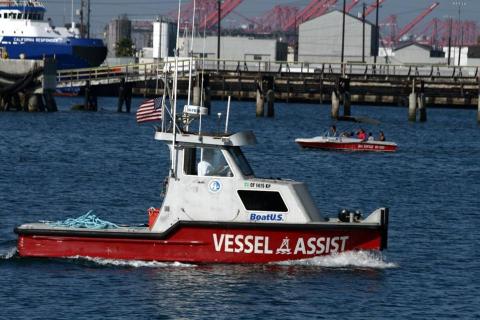 There had always been oil in the bilge of my Passport 40 Cayenne. This was, I was told, simply a fact of life with older engine designs. I dealt with it with absorbent blankets and, on one occasion, one of those absorbent roll-on-a-string products.

While docking one fine afternoon, the string snagged the prop shaft, spinning the wet, oily roll and taking out many of the engine’s instrument wires. Quite a mess and a bit of a rewiring task!

A month or so later, I decided to take the boat over to Sausalito for a fuel and pump out visit. Checking the oil before departure showed a very low level, so I added a few quarts, re-checked the dipstick, screwed the cap back on, and headed out alone on a windless day.

Traversing Richardson Bay, I noticed that, for the first time in 15 years, the tachometer had begun to register! “I must be a better mechanic than I thought!” I mused to myself. “I fixed that too.”

Then the engine alarm began to buzz. Something to check on when I reach the fuel dock half a mile away. Given the recent (possibly faulty?) rewiring of the instruments and the fact that I had just topped off the oil, I judged that it was a possible false alarm or a minor problem.

A loud BANG followed by a plume of smoke and a mechanical clangor announced that I had misjudged the problem. I immediately shut down the engine and headed below with a fire extinguisher to investigate. I cautiously opened the engine compartment but could not see anything amiss.

As good luck would have it, a Vessel Assist boat was about 100 feet in front of me. After persuading the operator that this was not a prank and that I was directly behind him (“Look behind you. I am the sailboat with the smoke pouring out of the cabin”), they towed me to a dock at a nearby boatyard, where I secured the boat and stayed till the engine was cool.

As it turned out, the oil pan had developed a severe leak, dumping the engine’s oil. The replacement oil I put in drained out in a matter of a half hour. The tachometer started working, it seems, by being grounded through a now-activated pressure switch. Because I didn’t quite believe the alarm, however, I did not shut down the engine immediately, which should have saved the engine and the day.

What did I learn?

The Cruising Club of America is a collection of passionate, seriously accomplished, ocean sailors making adventurous use of the seas. All members have extensive offshore boat handling, seamanship, and command experience honed over many years. “School of Hard Rocks” reports, published by the CCA Safety and Seamanship Committee, are intended to advance seamanship and help skippers promote a Culture of Safety aboard their vessels.