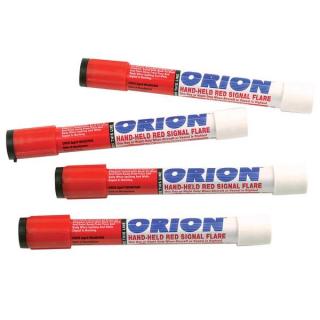 Whether you call them flares, or visual distress signals (VDS), or pyrotechnics, some visual form of getting attention from boaters or rescue agencies has been a mainstay of the Federal Recreational Boat Equipment requirements for decades. And during that time, boaters have cursed the negative attributes of these devices: their need to be replaced every 3 ½ years; the difficulty of disposing of them; their potential risk to health when in use; and their relative ineffectiveness due to short durations and poor water resistance.

For several years, the Coast Guard’s Research and Development Center (RDC) has been looking into replacements for recreational boat signals. They started by comparing products that were currently on the market, some of which meet the Coast Guard requirements for nighttime signals because they blink a white SOS signal. (Incidentally, while these products have received a lot of attention recently, they have actually been available from several different manufacturers for over 30 years in different forms.) An example is the Sirius Signal Electronic Flare that uses a very bright white LED that shines in a 360-degree arc, and which operates for 60 hours on three C cell batteries. These products meet the nighttime requirement for VDS, but are not effective during the day, and must be paired with a distress flag to meet the day/night requirements.

Recently, in the July 10 edition of the Coast Guard blog “Coast Guard Compass”, an article appeared that summarized the conclusions of the multi-year investigation of alternatives to traditional pyrotechnic signals. (Incidentally, the newly proposed products will likely require a change to the Code of Federal Regulations, a prospect that may delay the introduction of different types of signals for years.) The investigation looked at the how likely the signals were to be interpreted as distress signals at night, and not be confused with background lights or headlights or navigation lights. After testing many variations of color, frequency, and flash patterns, the team found that a 4 Hz combination SOS Morse characters in two colors was distinctive up to a distance of six miles. The signal consists of the S character (dit dit dit) in red/orange, followed by the O character (dah dah dah) in cyan (sort of light blue) followed by another red/orange S character. While single color signals could be confused with navigation lights, the two color signal was distinctive and unmistakable from other lights.

The article was not clear as to whether the proposed signal was effective at all during the day, so one can anticipate needing to have another form of day signal to accompany the new SOS light. The good news is that the new signal is likely to be a product that is durable, requires only a modest amount of maintenance, is not hazardous, and lasts far longer than the 2-3 minutes of current hand flares.