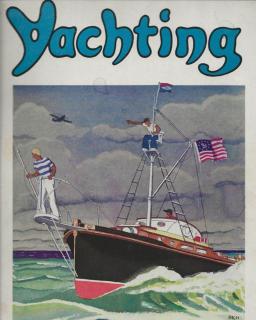 ‘Lore from the Lazarette,

As we consider the Cruising Club’s earliest days on this 100th anniversary, the contribution of Herbert Lawrence Stone stands tall.  Born in South Carolina to a family with important New York and New England connections, Stone was introduced to sailing on Cape Cod.  A frail child with compromised health, he was prescribed sea-air to lengthen his life and, obligingly, set sail on the coasting schooner Hattie Weston at the age of 17.  It seemed to work and Stone just kept sailing… for all his 84 years.  Yachting magazine was launched in 1907 by Oswald Garrison Villard, a friend and classmate who asked Herbert to join the staff and one year later to serve as editor.  Stone liked boats. However, it is difficult to discern why he would be chosen with a background as assistant paymaster of the New York Central Railroad, but it turned out that Villard was right!  Stone remained Editor at Yachting until 1952.  And the magazine flourished.  The oversized monthly was foundational reading for all yachting enthusiasts with articles on cruising, racing, equipment, new designs and classified ads for dreaming. It also featured wonderful yachting artwork, a boon to readers and artists alike.

Stone’s years at Yachting started off with gusto. He established a sailing race around Long Island in 1909 and in 1916 he won a powerboat race around the island in Cero.  It may have been good training as he soon headed off to war, ending up in command of a 110’ subchaser powered by three gasoline engines and accommodated by a beam of less than 15’.  Like a host of future CCA members including Sam Wetherill, Alfred Loomis and William Nutting, Stone saw action in the Atlantic and Mediterranean and participated in a race home in these unlikely vessels.  During the war Yachting was left in the capable hands of yacht designer Billy Atkin but Stone returned to retake the helm. And emboldened by the example set by the Royal Cruising Club and the enthusiasm and adventures of Bill Nutting, he led the founding and organization of the Cruising Club of America in 1922.

There has been much written about the debate within the membership about the Club’s focus on yacht racing.  Many members believed that the Cruising Club was just that and that racing was anathema. But Stone was firmly in the camp which supported involvement in racing and he advanced the Club’s support of the revived Newport Bermuda Race in 1923 when he became the Club’s second Commodore. His view was simple; he championed racing because he believed it made sailors better at sea. He sailed as navigator aboard Sunbeam in that first post-war race and in 1926 the CCA became a formal co-sponsor of the Bermuda Race in a partnership with the Royal Bermuda Yacht Club that endures to this day.

Stone served in many CCA capacities including as chairman of the Awards Committee and that role, in combination with his leadership of Yachting, advanced the stature of the Blue Water Medal and other awards.  Through several ownership changes and structures, “The Skipper” remained at the helm of the magazine well into his eighties, even writing articles under pen names like Cap Stan when funds to pay writers were scarce.  When he died in 1955 the burgee of the Royal Bermuda Yacht Club was flown at half-staff, the first time in 111 years that a non-member was so honored.

Herbert Stone was inducted into the National Sailing Hall of Fame in 2019.  The induction plaque and inductee’s book were recently presented to the Cruising Club by his great granddaughter Katherine Coleman Nicoll of behalf of the Stone Family and they now reside in our historic archives at IYRS.

A Call for Submissions!

While Stone accomplished much, he left one task undone.  At a meeting in January of 1923, he volunteered to write a song, a sea chantey for the Cruising Club, but nothing further was ever heard.  However, it now seems only appropriate that we take up the challenge on this, our One Hundredth Anniversary.  Nothing could be better than a rousing CCA Sea Chantey and so…THIS IS THE CALL FOR SUBMISSIONS.  Stations and Posts, muster your writers, raise your voices.  A committee of judges will be assembled, and the entries will be reviewed and debuted in Newport in September.  Send entries to The Historian.  Base the music on a known Song of the Sea or compose your own tune.  Write lyrics that evoke our heritage, our history, and our adventures.  Be bold and go where Herbert Stone never went.  Don’t miss this opportunity to become immortal in the annals of the Cruising Club of America.

(Editor’s note: Assistance in research for this article was kindly provided by Vanessa Cameron, Librarian and Archivist of the New York Yacht Club.)