Stephen Brown is the recipient of the Cruising Club of America’s 2020 Far Horizons Award, awarded for his five-year series of cruises through the Northwest Passage, Alaska, Chilean Channels, South Georgia, Antarctica, and return to Maine, completing a circumnavigation of the Americas. 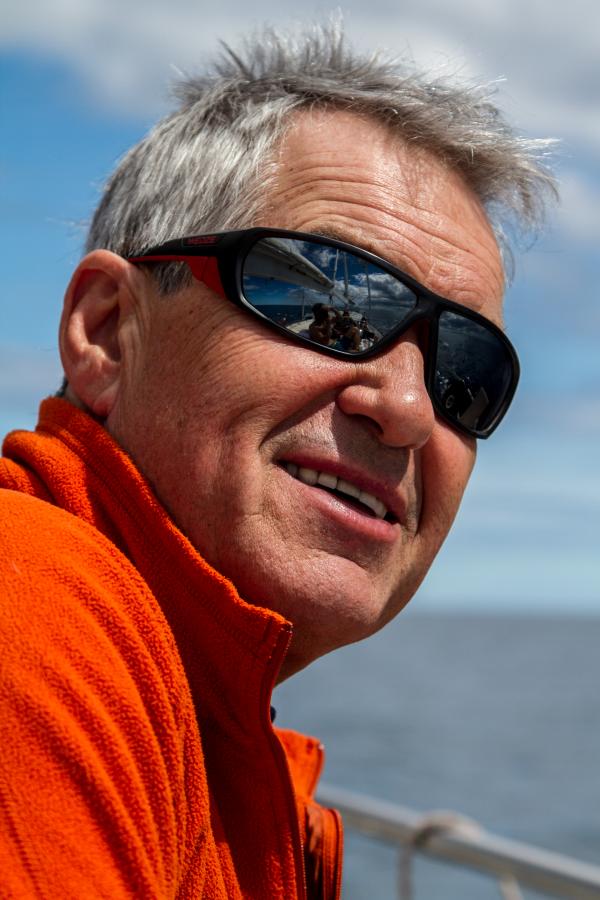 Brown was a mountaineer, climber, and “land” adventurer before becoming a sailor.  Included in his climbing around the world are first ascents in the Himalayas. Sailing came to him in much the same way it came to H.W. Tillman, as an adventurous way to approach more remote, unclimbed peaks. It seems that sailing has become a way of life for him that fully complements the mountaineering. With his wife Trish, he completed a “near circumnavigation” in a former yacht, prior to acquiring Novara, an AeroRig Besteaver 60 that is his current expedition yacht.

Aboard Novara, Brown made a five-year circumnavigation of the Americas, departing from and arriving back to Camden, Maine. Noteworthy adventures along the way included a transit of the Northwest Passage, cruising and “exploring” Alaska, sailing to Easter Island, transiting the channels of Chilean Patagonia, and then basing Novara in the Falkland Islands for his most challenging sailing.  In our view, by itself, his voyage to South Georgia for climbing and experiencing the Shackleton Traverse qualifies for this award. Brown has now sailed to Antarctica four times, and for him to say that “South Georgia is a magnitude more difficult than Antarctica” speaks volumes.  Consider his view of South Georgia knowing that while seeking shelter within the caldera of Deception Island, Novara was driven ashore by winds gusting to 100 knots.

This expedition continued with an exciting, extended cruise of the Antarctic Peninsula that included his fourth trip to the Lemaire Straits, which Brown calls “a truly magical place.” From Antarctica, the cruise continued north along the east coast of South America, through the Caribbean, and back to Camden. For this amazing adventure, the CCA is proud to give the Far Horizons Award for 2020 to Steve Brown.

The Cruising Club of America (CCA) established the Far Horizons Award in 2005 to recognize a club member who has achieved the high standards of the Club’s broad objective of “adventurous use of the seas”.  This award is limited to members of the Club and is, in some respects, similar to the Club’s most coveted Blue Water Medal.

The Far Horizons Award was established in 2005 by the CCA Governing Board to recognize members of the Cruising Club of America for a particularly meritorious cruise or series of cruises that exemplify the objectives of the club.  The name of the award is derived from the name of the books published by the Club containing accounts of cruising adventures by its members.