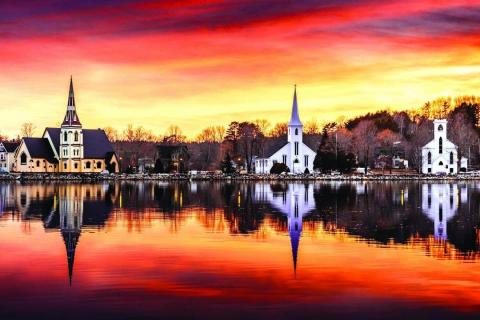 by Cruising Club of America

“When I was first thinking about a cruise to Nova Scotia, Yarmouth, and Saint John and the Reversing Falls in New Brunswick, seemed the destination. I’ve yet to sail there ... Let me take you on my cruise.”

It is a little over 30 years ago that I bought my present boat, Morning Watch, a Luders 36, built in Hong Kong in 1970. It was early summer, and she was on the hard in a boatyard in Buzzards Bay, Cape Cod, covered in leaves. This was the boat to take me cruising. For several years I sailed the coastal waters of the Cape and Islands, and Boston to Maine. But Maritime Canada beckoned. When I was first thinking about a cruise to Nova Scotia, Yarmouth, and Saint John and the Reversing Falls in New Brunswick, seemed the destination. I’ve yet to sail there. Instead, I read the Nova Scotia cruising guides: from New England, Shelburne should be my first port of call. Let me take you on my cruise.

From the Cape Cod Canal, we sailed across the Gulf of Maine to Shelburne, a port of entry, and the Shelburne Harbour Yacht Club (SHYC) at the head of the harbor. Of course, we checked the tidal currents in the Gulf of Maine to be sure to ride a favorable current around the southwest corner of Nova Scotia. The SHYC has floating slips and a breakwater to protect in a blow. Canada Border Services Agency is a phone call away, and you can call them up to four hours before arriving. They come from the ferry terminal in Yarmouth on a regular basis.

The summer winds are generally southwesterly for a downhill sail from Shelburne to Lunenburg, the first colonial outpost after Halifax. The town is famous for fishing, its Grand Banks schooners, and the competitive races years ago with Lunenburg’s arch rivals on the banks, the schooners of Gloucester, Massachusetts. The harbor is large with room to anchor. There are 16 rental moorings and the waterfront development authority has just established six rental slips in town. In the first half of the last century, the business of the town was fishing. Now it is tourism.

Let me digress for a minute for some local history. In 1920, the last race of the America’s Cup in New York Harbor was canceled because the winds were forecast to be as high as 23 knots. The fishermen of Lunenburg were amused. They established the International Fishermen’s Trophy, and offered a prize for the winner of the races between the best of Lunenburg and the best of Gloucester. That first year, the Delawana from Lunenburg lost to the Gloucester-based Esperanto. Shock. William J. Roué, Nova Scotia’s first naval architect, was commissioned to design the schooner Bluenose. She was launched in March 1921 and rushed off to the Grand Banks to fish in order to qualify for the race that year. She was captained by experienced Lunenburg fishing captain Angus Walters. From 1921 until the last of the races in 1938, she lost only once, in 1930, and that to the Gloucester schooner Gertrude L. Thebaud, described by a Boston newspaper as “light and winsome [with] the air of a Boston debutante.” By 1938, the days of the Grand Banks fishing schooners were over. But by then, the Bluenose had become the icon of Nova Scotia. In 1946, she was lost on a reef off Haiti. In 1963, a replica of the Bluenose, the Bluenose II, was built in Lunenburg by Smith & Rhuland, financed by a brewery. She was sold to the province in 1971 for $1, rebuilt in 2010, relaunched in 2015, and remains today a symbol of Nova Scotia and Canada.

From Lunenburg on the way to Halifax, we passed by Mahone Bay, a cruising ground known for gentle sailing with little fog. It is said that there are 365 islands in Mahone Bay and local sailors tell me that when Chester Race Week—generally held during the second week in August—is over, so is the summer. In fact, there is wonderful sailing well into the fall. The Lunenburg Yacht Club on Hermans Island is in Mahone Bay, with full facilities for visiting yachts. There are many wonderful coves and anchorages, and the town of Mahone Bay is known for its three picturesque churches at the head of the harbor.

On to Halifax. In the North West Arm is the Royal Nova Scotia Yacht Squadron (RNSYS), begun in 1837, and the Armdale Yacht Club. Both have slips, moorings, and full facilities including fuel. You can also anchor at the head of the North West Arm and walk to the local shops, or reserve a slip right downtown at the Maritime Museum of the Atlantic or elsewhere along the waterfront. Farther into Bedford Basin is the Dartmouth Yacht Club, also with full facilities.

We took a slip at the Maritime Museum, sharing the berth with HMCS Sackville, the last of the Flower-class corvettes from World War II. We were there for Canada Day and the Fourth of July. No sooner had we dressed ship at 0800 on the Fourth than the Sackville broke out the Stars and Stripes from her starboard spreader.

Later we sailed to Sable Island, a difficult place, famous for its “wild” horses and known in Maritime Canada as “the graveyard of the Atlantic.” The island is a sand spit 90 miles off the coast of Nova Scotia, surrounded by shifting sand bars and major ocean currents, and sits close to the edge of the continental shelf. Currents can run hard here. The prevailing summer winds are southwesterly, but the bad weather comes in from the northeast. You must anchor on the north side of the island, not a good place to be if the weather turns against you. We had a glorious sail there, anchored on the exposed north side, had an exciting tour of the island, and sailed back the following day as the winds slowly turned against us. We got back to the mainland just before a blow from the northeast filled in.

Many cruisers have sailed from New England to Halifax and headed straight to St. Peter’s and the Bras d’Or Lakes, missing some of the best cruising in Nova Scotia, the Eastern Shore (my cruising grounds). Wilson Fitt (BDO) has updated Mike Cox’s Cruising the Eastern Shore (now out of print) with his Eastern Shore sketch charts, available from Wilson and hopefully referenced in the new edition of the CCA/RNSYS Cruising Guide to the Nova Scotia Coast, expected to come out in the spring of 2019.

The first stop when cruising the Eastern Shore is Jeddore Harbour, 30 miles east of the North West Arm. You can anchor just past Bakers Point, or go all the way into the Eastern Arm or the Western Arm. It’s about a five-mile trek all the way in, but well protected once in. You can also continue a little farther on to Owls Head.

Shelter Cove is secluded and in all the times we have been in, we have only twice seen another boat. The chart shows one-foot depth, but local knowledge knows there is at least eight feet. From Shelter Cove, one can go outside to the Liscomb River and up the river to Liscombe Lodge, or take the inside passage through the 100 Wild Islands. Along the way we have anchored overnight at Malagash Cove and Beaver Harbour, and have never seen another boat. The lodge has a float with fresh water and fuel, and Chester, the dock master, will loan you his minivan for a trip to the grocery store—the rumor is that he has never had to put a liter of gas into his van in the summer because we cruisers always top up the tank.

From Liscomb, it’s 40 miles to Yankee Cove in Whitehead Harbour. Pay attention going in, but once in, the cove is well protected. There’s lots of room to anchor, but you will share part of the anchorage with a mussel farm. This is a popular anchorage, and you will almost certainly see another boat or two.

Forty miles more and you are at St. Peters Lock, the southern entrance to the Bras d’Or Lakes. If cruising in June or July, you will probably have been sailing in fog, either continuous or off and on. Now the fog will be lifting as you sail through Andrew Passage, well marked and beautiful, or around the outside of the Canso Ledges.

The Bras d’Or Lakes are generally fog free, with gentle sailing and plenty of wonderful anchorages. On the way to Baddeck, the major town in the lakes, one should drop the hook in Maskells Harbour where, our history tells us, the CCA was founded. From there, sail on to Baddeck and take a slip or mooring at Baddeck Marine, or anchor off the Bras d’Or Yacht Club. A visit to the Alexander Graham Bell Museum on Beinn Bhreagh (“beautiful mountain” in Gaelic) is a must.

The sailing around the outside of Cape Breton is exciting and the destinations wonderful: Mabou, Cheticamp, Dingwall, Ingonish, and Louisbourg. Or you can continue into Northumberland Strait to Prince Edward Island, north to the Magdalen Islands, or northeast to Newfoundland. From Fortune in Newfoundland it is 20 miles to France. Yes, France: St. Pierre and Miquelon. But that’s another cruise.

Cruising Nova Scotia can be a challenge in the early summer months because of fog. Come with radar. Remember that when you sail from one anchorage to another along the eastern coast, you are sailing in the North Atlantic. But if you are arriving from Maine, you will find our waters almost lobster-pot free! The summer winds are southwesterly, fine for cruising east. Later in the season there will be occasional northerlies, good for sailing home. We have busy, historic harbors—among them Halifax, Lunenburg, and Louisbourg—and many, many quiet, pristine, secluded anchorages where you will not see another boat. Peter Loveridge in the preface to his cruising guide (recommended below) said it best: “… the coast of Nova Scotia remains the finest accessible cruising ground in North America.” No bias on my part.

RECOMMENDED CRUISING GUIDES: Cruising Guide to the Nova Scotia Coast, Cruising Club of America and the Royal Nova Scotia Yacht Squadron.  The current edition is being updated and should be available next spring. pilot-press.com/cvr-ns.htm

CCA Member John van-Schalkwyk, known to his friends as John or van-S, learnedto sail on the south coast of England and the Norfolk Broads. Later he lived on Cape Cod for twenty years. Sailing south on a cruise to the Caribbean he met Heather, a Canadian, in Hollywood—that’s Hollywood, Maryland. A year later they were married and sailed together to Nova Scotia, where they now live and cruise. Van-S has crewed for friends to and from the Caribbean, Bermuda, and the Azores. He has made a number of passages from Nova Scotia to New England, the Chesapeake, and Key West, and twice crewed for friends from the U.S. directly to Ireland. He is a longtime member of the Ocean Cruising Club and is the OCC port officer for Halifax.