We have selected Jeanne Socrates (Ealing, West London, England) to receive the  Blue Water Medal for her completion of a solo nonstop circumnavigation of the world on her third attempt. The Blue Water Medal was first awarded in 1923 and is given “for a most meritorious example of seamanship, the recipient to be selected from among the amateurs of all nations.”  The award will be presented  at the annual CCA Awards Dinner on March 7, 2014 at New York Yacht Club in Manhattan. 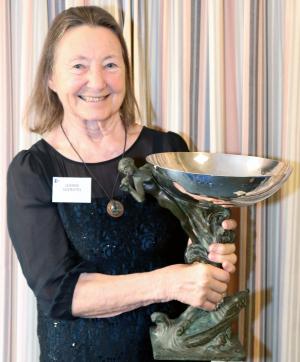 At the age of 48, when her children were grown, Socrates started sailing. She and her husband George began taking classes in dinghies and windsurfers and moved into cruising boats in 1994. In 1997, the two bought the 36-foot Najad 361 Nereida, and in 1999, they entered the annual Atlantic Rally for Cruisers, which takes participants on a 2,700 nautical mile journey across the Atlantic Ocean from the Canary Islands’ Gran Canaria to St. Lucia in the Caribbean. It was in Grenada in September 2001 that, sadly, George was diagnosed with cancer. He passed away in London in March 2003.

Jeanne kept the couple’s sailing dream alive, continuing on with long-distance cruising. In 2007, she made her first attempt at a solo circumnavigation of the world, starting out in March of that year from Mexico aboard Nereida. She sailed southwest to Australia, then on to South Africa, arriving in Richards Bay on November 16th. In February 2008, she departed Cape Town for the Caribbean where she encountered setbacks due to the need for boat repair, which was undertaken in Trinidad. From there, Socrates sailed to Panama and Guatemala. Unfortunately, the final leg of her journey to San Francisco – where she planned to race in the 2008 Singlehanded Transpac – was cut short on June 19th when Nereida’s autopilot remote control ran out of battery power, and the boat was grounded on a steep surf beach north of Acapulco (Mexico), less than twelve hours away (and 60 miles short) from crossing her outbound track and completing the circumnavigation.

She was determined to try again, but this time it would be a non-stop circumnavigation. Socrates purchased a new custom-fitted Najad 380 (also named Nereida), and in November 2009 she set out from the Canaries but was forced to stop in South Africa where Nereida underwent rigging repairs and an engine replacement. Three months later, she sailed to Australia and New Zealand and then on to Port Townsend, Wash., where she worked on the boat in preparation for her second nonstop circumnavigation attempt.

In order to satisfy official record regulations – which called for the voyage to be in excess of 40,000 kilometers (25,000 miles) – her journey would have to start and finish in British Columbia’s capital city of Victoria (Canada).

On October 25, 2010, Socrates began her second nonstop attempt from Victoria, but on January 5th, just 100 miles west of Cape Horn (Chile), Nereida suffered a severe knockdown, which broke the boom, tore away her dodger and damaged the rigging. Socrates emerged uninjured and was able to sail around the Horn, and then motor-sailed to Ushuaia (Argentina) – known by many as the world’s southernmost city. Although the city lacked yacht repair facilities, Socrates was able to have replacement parts shipped in. In less than two months, Socrates and Nereida were underway again, sailing east around the globe by way of the Falkland Islands, Cape Town, Hobart (Tasmania, Australia), Stewart Island (New Zealand), Tahiti (French Polynesia) and Hawaii.

On August 1, 2012, Socrates sailed through the Strait of Juan de Fuca to Washington and to Victoria, completing a solo circumnavigation via the Five Great Capes of the Southern Ocean.

On October 22nd, 2012, Socrates set out again, determined to complete the journey nonstop. She started from Victoria, and sailed around the world by way of Cape Horn, Cape of Good Hope (South Africa), Cape Leeuwin (Australia), the South East Cape (Tasmania). From there, Socrates sailed up the Tasman Sea, where avoidance of a tropical storm forced her to sail west of Fiji and on north, passing west of the Hawaiian Islands. After 259 days alone and unassisted at sea, Socrates sailed past the Ogden Point breakwater in Victoria, on July 8, 2013 at 2:26 a.m., completing her nonstop goal and becoming the first woman to sail nonstop around the world (on a route that started and finished in North America) and the oldest woman to sail solo nonstop around the world.

Socrates is raising money for Marie Curie Cancer Cure, a British program that offers free home nursing for terminally ill cancer patients. Links to the charity can be found by visiting her website, http://svnereida.com/.