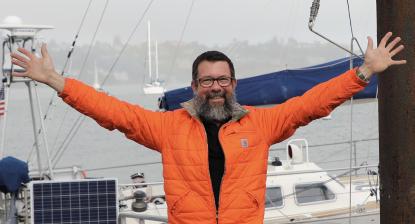 For sailing his 45-foot aluminum cutter, Moli, alone around Antarctica and then through the Northwest Passage in a single season, departing and arriving from San Francisco, Randall Reeves has been named the recipient of the Blue Water Medal from the Cruising Club of America (CCA). Reeves, 57, is the first person to imagine and accomplish the 39,000-nautical-mile voyage, creating a “Figure 8” track around the world, keeping the Americas to port and Antarctica to starboard.

This was not Reeves’ first adventure into the watery world of sailing offshore. He was bitten by the sailing bug as a teenager while sailing with his seafaring father. Over the years, he owned boats and sailed the eastern Pacific coasts of America, developing the singlehanded-sailing expertise that would allow him to dream of this scale of an adventure. With his years of experience, planning, knowledge of weather and sea, and the wherewithal to make this attempt, he still needed a proper boat.

He found Moli (ex: Taonui, ex: Asma) an aluminum cutter owned by Tony Gooch, a fellow sailing adventurer, who had sailed Taonui around the world, singlehanded, nonstop in 2002. Gooch was the first person to do so having set off from North America, and for his achievement, he also received the Blue Water Medal (2003). A second Medal for the same boat is extraordinary. The only other yacht to share this distinction in the 97-year history of the Medal is Wanderer III, first with Eric and Susan Hiscock (1955), then with Thies Matzen and Kicki Ericson (2011). 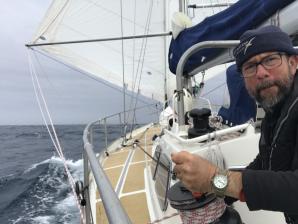 Even aboard a boat with Moli’s pedigree, accomplishing the route required extraordinary determination and perseverance. In 2017, during the first attempt, the South Pacific seas damaged Reeves’ autopilot and then his windvane, requiring a repairs stop in Ushuaia, Argentina. He continued around Antarctica, trying to keep up with the seasons, when a storm in the Indian Ocean storm caused multiple knockdowns. Though there was less wind than in the Pacific, Reeves described the seas as “tremendous, tall, steep and breaking continuously for 100 and 200 feet.” Moli was slammed down off a wave, shattering a pilothouse window and drowning all electronics. Reeves was able to stem the flooding, cover the window, and navigate another month to Tasmania for temporary repairs. With his “Figure 8” delayed, not abandoned, he sailed nonstop back to San Francisco.

After only three months of refit and repairs, Reeves set off on his second attempt in September of 2018, even better prepared. With new storm covers attached over windows, new welded railing, new electronics, and vast recent experience under his belt, around the continents and around the World he sailed. Keeping the Americas to port and Antarctica to starboard, passing beneath Cape Horn twice before poking Moli north through the Arctic ice, Reeves sailed the great loops for 301 days. 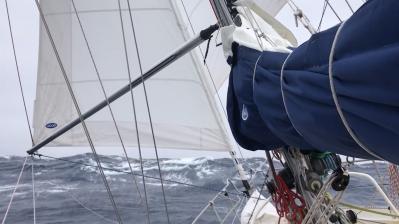 During the voyage, Reeves Reeves trailed along in his wake an armada of wannabe adventurers and admirers through his frequent blog entries and onboard videos shared on his website. Reeves has a way about him:  gracious, caring, and humble with a self-effacing humor. He has proven his ability to master the oceans without losing his appreciation for the help he has received and the wonders of the people he has met along the way. On October 19, 2019, 385 days after setting out, Reeves sailed Moli under the Golden Gate Bridge to complete the first singlehanded Figure 8 around Antarctica and the Americas. 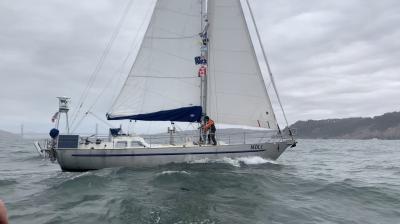