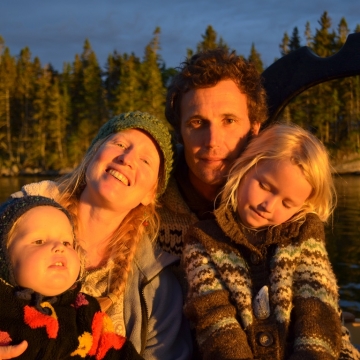 Bruce Halabisky and Tiffany Loney are the recipients of the CCA’s 2018 Blue Water Medal, awarded for their 11-year circumnavigation in Vixen, a 1952 John Atkin designed wood gaff-rigged cutter, with their two daughters, born during the cruise, as crew. The CCA established this award in 1923 to reward “meritorious seamanship and adventure upon the sea displayed by amateur sailors of all nationalities that might otherwise go unrecognized.”

In September of 2002, Halabisky and Loney first saw Vixen at the Wooden Boat Festival in Port Townsend, Wash., in the final stages of restoration. One would have to say it was love at first sight as they sold their few assets and within a few months owned Vixen, which had launched in 1952 from the renowned Joel Johnson yard in Bridgeport, Connecticut. After two years of living onboard, saving money and becoming good friends with Vixen, they left for Hawaii in September of 2004. Having sailed across the Pacific and Indian Oceans; completed three trans-Atlantic crossings; visited over thirty countries; and documented life onboard Vixen in podcasts, magazine articles and books, the family is now happily exploring life on land from their home on Orcas Island.

Often asked why he chose a fifties wooden gaff-rigged cutter for an 11-year circumnavigation, Halabisky explained that he “lay aside all my rationalization and logic and can appeal only with the beauty of a perfectly realized sheer line or the image of an audaciously long bowsprit awash with seafoam or a finely carved teak block gleaming in the sun.  There is something to be said for sailing around the world with a certain amount of style and class.”  Indeed!