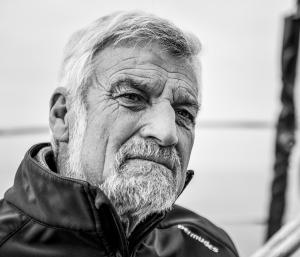 Jean-Luc Van Den Heede will be the recipient of the Cruising Club of America's 2019 Blue Water Medal, to be awarded for his achievements in single-handed sailing. Most notable among his accomplishments are six solo circumnavigations, including victory in the 2018 Golden Globe Race and setting the world record for fastest west-about circumnavigation.

Born in France in 1945, Van Den Heede completed two Mini Transat races in 1977 and 1979 before sailing his first solo circumnavigation in the 1986 BOC Challenge Race. He placed second in his class of 40-50 foot yachts, covering the four legs of the race in 161 days. He followed this achievement by entering in the inaugural Vendée Globe. This solo round-the-world race was founded by Van Den Heede's fellow competitor in the BOC Challenge (and winner of the 50-60 foot class), Philippe Jeantot, who wished to create a non-stop race that would be the ultimate test of an individual's endurance at sea. Van Den Heede finished third, completing the race in 112 days.

With the first Vendée Globe, Van Den Heede, formerly a mathematics teacher, decided to devote his life to sailing. He entered the second Vendée Globe in 1992 and finished second. Soon thereafter he entered in the inaugural Transat Jacques Vabre, following the historic coffee route from France to South America. While this has been a two-handed competition since 1995, the first race, from Le Havre to Cartagena (Colombia) in 1993, was for solo sailors. Van Den Heede placed fourth. In 1994-5, Van Den Heede was again racing in the BOC Challenge, in the 50-60 foot yacht class, this time placing third. He competed in the single-handed Route du Rhum transatlantic race in 1998, after which he began attempts to beat the record for the fastest east-to-west circumnavigation.

Sailing against prevailing winds and currents in the Southern Ocean, Van Den Heede's goal is considered one of the toughest in sailing. He made his first attempt in 1999 but hit a submerged object halfway between Cape Horn and New Zealand. He then built the 85-foot aluminum monohull Adrien for a second attempt in 2001, but was again forced to retire when the keel began working loose from the hull soon after rounding Cape Horn. In 2002, Van Den Heede attempted the circumnavigation again, but was dismasted south of Australia. This time, he brought the boat back to France with a steel mast he built himself in Tasmania.

In 2004, aboard Adrien, Van Den Heede broke the record for fastest west-about circumnavigation, crewed or solo (he sailed solo). He made the voyage in 122 days, 14 hours, 3 minutes, 49 seconds, cutting 29 days off the previous record. His record still stands today.

At age 73, Van Den Heede entered the 2018 Golden Globe Race, which was run in celebration of the 50th anniversary of the very first round-the-world yacht race, the Sunday Times Golden Globe Race. The original trophy was offered to the first sailor to complete a non-stop, solo and unassisted circumnavigation of the world via the great capes, and a separate prize was offered for the fastest such voyage. Sir Robin Knox-Johnston was the only one of nine entrants to complete the race. 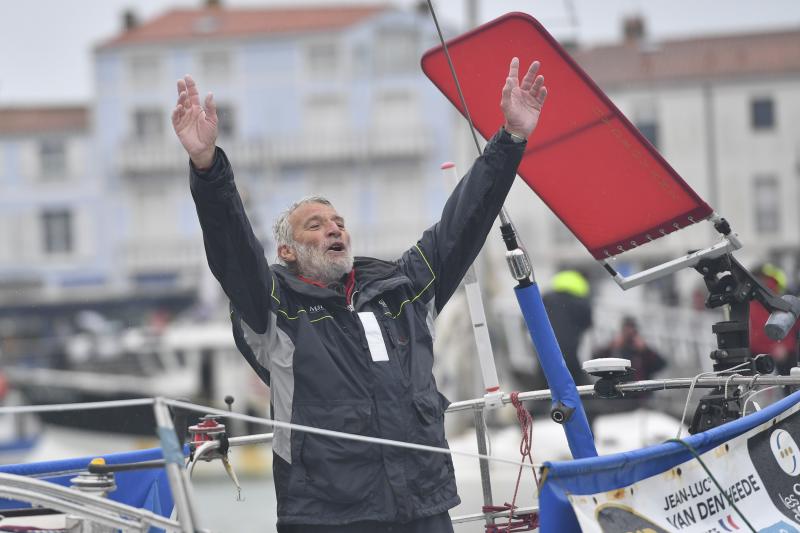 To honor the original race, the 2018 Golden Globe Race limited entrants to the same type of yachts and equipment that were available to the competitors in 1968. This meant relatively heavy displacement, full-keel yachts with lengths on deck of between 32 and 36 feet, and no satellite navigation aids (GPS). Before the race began, Van Den Heede commented about these conditions:

“…the slow speeds of these classic old boats with their long keels, the absence of weather information, the loss of all electronics and reliance on a sextant to plot positions, the lack of terrestrial contact, and the replacement of an electric pilot with wind vane self steering, will make this test even more . . . difficult than the Vendée Globe. But this is good. I want to re-live the conditions and challenges that my sailing predecessors enjoyed. . . .”1

Van Den Heede won the Golden Globe Race on January 29, 2019, having been at sea 212 days aboard Matmut, his Rustler 36. He did so despite a capsize in the Pacific which required that he repair his rigging. Of the 18 entrants in the race, only five finished; of those who retired, five were dismasted. In winning the Golden Globe, Van Den Heede took over from Sir Robin Knox-Johnston as the oldest sailor to complete a solo round-the-world race. Reflecting on the race, he commented that morale is more important than physical strength.