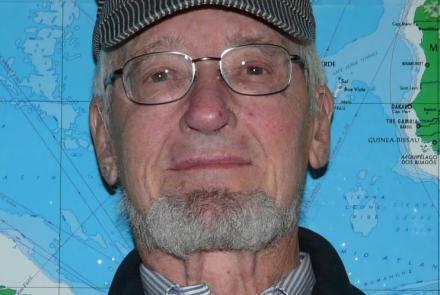 NEW YORK (Feb. 9, 2021)—An extraordinary group of sailors have been named winners of the Cruising Club of America most prestigious annual awards: Christian Charalambous, of Australia, receives the Rod Stephens Seamanship Trophy; Calypso Romero and Adrien Koller, of Ushuaia, Argentina, the Young Voyager Award; and Stephen Brown, of Carleon, South Wales, the Far Horizons Award. In January, the recipient of the CCA’s iconic Blue Water Medal was announced as Randall Reeves, of Oakland, California.

Christian Charalambous, of Sydney, Australia earns the Rod Stephens Seamanship Trophy for heroic actions after the yacht Showtime inverted upon losing its keel on a very rough night in the Tasman Sea. Aboard the boat as one of its delivery crewmembers, Charalambous dove under the boat despite the dangerous wave conditions and used a knife to free the life raft, thereby saving the entire crew.

An adventuresome French couple, Calypso Romero and Adrien Koller, are the 2020 recipients of the Young Voyager Award. Established in 2016, the award recognizes “a young sailor who has made one or more exceptional voyages.” Only in their early 30s, Romero and Koller have already made multiple exceptional voyages in the last eight years, taking in challenging high-latitude waters, including Antarctica, and visiting places seldom reached by bluewater sailors.

Stephen Brown, a citizen of the UK and a member of the CCA, receives the 2020 Far Horizons Medal in recognition of his five-year series of cruises. Sailing aboard his current expedition yacht, Novara, an AeroRig Besteaver 60, Brown sailed the Northwest Passage, Alaska, the Chilean Channels, South Georgia, Antarctica, and returned to Maine, completing a circumnavigation of the Americas. Brown was a mountaineer, climber, and “land” adventurer before becoming a sailor, and included in his climbing are first ascents in the Himalayas. Sailing came to him in much the same way it came to H.W. Tillman, as an adventurous way to approach more remote, unclimbed peaks.

In a first for the CCA, a Special Recognition Award has been presented to another sailing organization, the Salty Dawg Sailing Association, for its contributions to the cruising community during a period of international border closings in 2020. Using their management structure with a willingness to assist sailors who became isolated, the Salty Dawgs made it possible for more than 180 boats to sail safely from the Caribbean to North America in the spring of 2020.

Simon and Sally Currin, of Powys, UK, are the recipients of the CCA’s 2020 Royal Cruising Club Trophy, awarded to a member of the Club for “the most interesting cruise of singular merit and moderate duration.” The couple spent more than a month cruising on the rarely visited Scoresby Sound, Greenland, above 70N.

Alan K. Forsythe, of Kent, Washington, is the winner of the CCA’s 2020 Charles H. Vilas Literary Prize for his article in the club’s Voyages magazine, "The Essex and the Easterling: Two Whale Attacks in the Pacific."

Peter L. Chandler, of Portland, Maine, has been named winner of the CCA’s 2020 Richard S. Nye Trophy, awarded to a club member for his 20 years of service as the CCA Treasurer. John “Jay” Gowell and Jeffrey S. Wisch received CCA Commodore’s Awards for their extraordinary service to the club this year as Newport Bermuda Race chairman and CCA Fleet Surgeon, respectively.

The 2020 CCA awards will be presented at a members-only virtual awards ceremony on March 7.